Alexander served on the Albemarle City Council for 28 years and volunteered for more than 60 years on nonprofit boards and commissions. 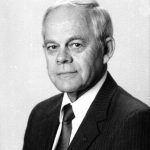 “Troy was a highly dedicated man,” said Mayor Ronnie Michael, who worked with Alexander — first as police chief and then as a fellow council member — for about 15 years.

“He was dedicated to his family and his church first, but gave that same dedication to the city as a whole,” Michael said.

In past interviews, Alexander accredited that attitude to God and to his time as a Marine.

He was about 21 when the United States entered World War II and he joined the Marines.

Along with mastering new radios and going to gunnery school, his military stint showed him that taking responsibility meant taking action.

And upon coming home, he put that into action.

Along with getting married, having two daughters and getting his degree in accounting to work for Cannon Mills, Alexander began volunteering with First Lutheran Church in Albemarle, the local Rotary Club and the newly emerging YMCA.

In fact, even after he retired from Cannon Mills — as a vice president with 40 years of experience under his belt —Alexander continued to serve with those non-profit groups, remaining in leadership positions until the day he died.

“This Y would not be here if it were not for Troy and the people who worked with him,” Stanly County YMCA director George Crooker said.

Alexander served on its board for about 63 years.

“He was absolutely instrumental in starting a foundation for us,” Crooker said. “He ensured we had a nest egg to move into the future and then the board grew it substantially over the years. There’s no doubt, his church and this Y were his passion.”

And while many would have considered that as a full retirement, Alexander was not done.

Joining the city council just a couple years after stepping down from Cannon Mills, Alexander remained on it until he was 90.

During those years, he pushed for everything from water and sewer infrastructure upgrades to new amenities like City Lake Park and the Roger Snyder Greenway.

“But I think what everyone remembers him most for is his character,” Michael said. “Troy Alexander was a gentleman in every sense of the word. And in every situation.”

Whether asking questions of contractors, thanking citizens who came in with complaints or suggesting that the city adopt initiatives like recycling, Alexander was always respectful, sharp, and steady, both staff and council members said when he stepped down from office in 2015.

In 10 terms in office, Alexander only once ran campaign ads.

“He was a man of few words, but when he said it you knew he meant it,” Michael said. “He always did as he said.”

“The term role model doesn’t even begin to cut it,” he said, looking back on seven years of working with Alexander.

“They just don’t make people like him anymore,” Crooker said. “He was humble, a servant-leader in every sense of the word… we are a better Y, and I’m a better man, because of him.”

In order to give people a chance to recognize Alexander, a memorial service will be at 11 a.m. Friday at First Lutheran Church in Albemarle.