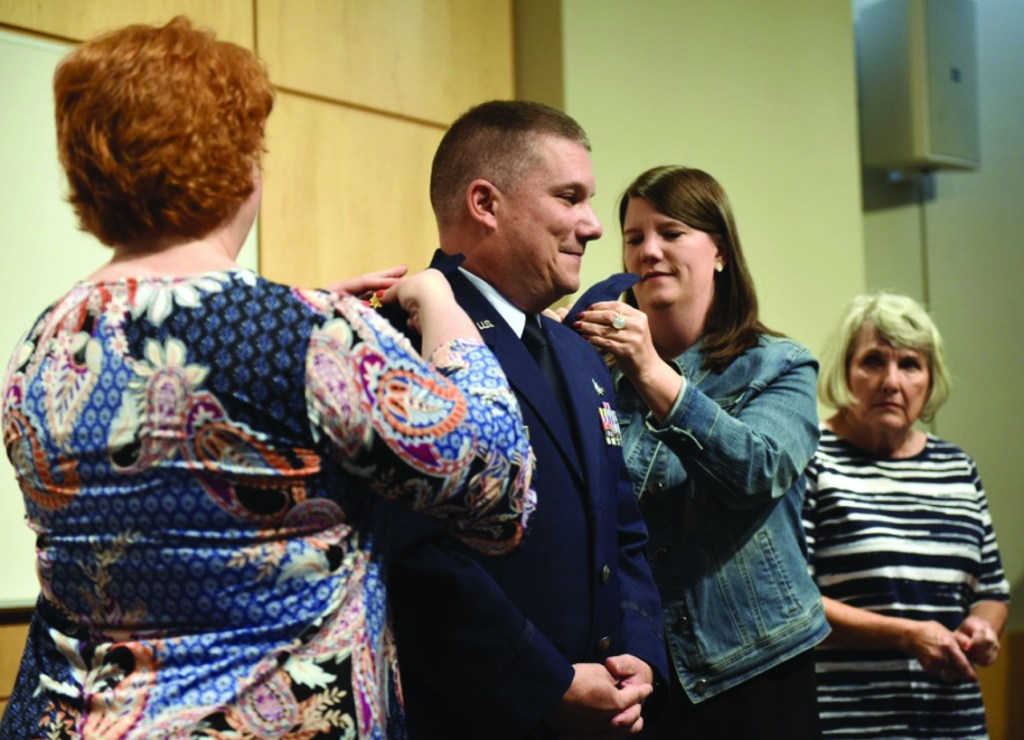 U.S. Air Force Maj. Bradley Claxton, 263rd Combat Communications Squadron commander, is pinned to the rank of Lieutenant Colonel by his wife Karen (left), sister Alicia (right), and mother Lynn (far right), during a promotion ceremony held in his honor Aug. 2, 2019, in New London. Claxton has many relatives from the southeastern United States who joined in the promotion festivities. (Contributed)

Claxton’s immediate and extended family enjoyed witnessing the appreciation of his work commemorated in a ceremony.

“I’m really excited. He’s worked really hard and it’s been a process as a family, too, but it’s definitely been worth it and he deserves it,” Claxton’s son, Jonathan, said.

Claxton began his career in the North Carolina Air National Guard as an enlisted member in New London. While he served a few years at the Charlotte-Douglas International Airport base, his family was happy to return to the New London location and rekindle old friendships.

“We started off in Stanly County, so it was like coming home when we came back to the 263rd (Combat Communications Squadron), and it’s been fun to see Bradley as an enlisted guy here and then as an officer,” Karen, Claxton’s wife, said. “We’ve got family ties from a long time in Stanly County.”

When a military member joins the ranks, their family becomes part of that dynamic and at times, they are put the stressors of not seeing their loved ones due to deployments and long work hours.

“He’s made it a career but it’s also been our career as a family, too,” Jonathan said. “We love the Air Force and the 263rd (Combat Communications). We’ve just really enjoyed the camaraderie that we’ve gotten to have with the families here so that’s the goal, to continue that wherever he goes.”