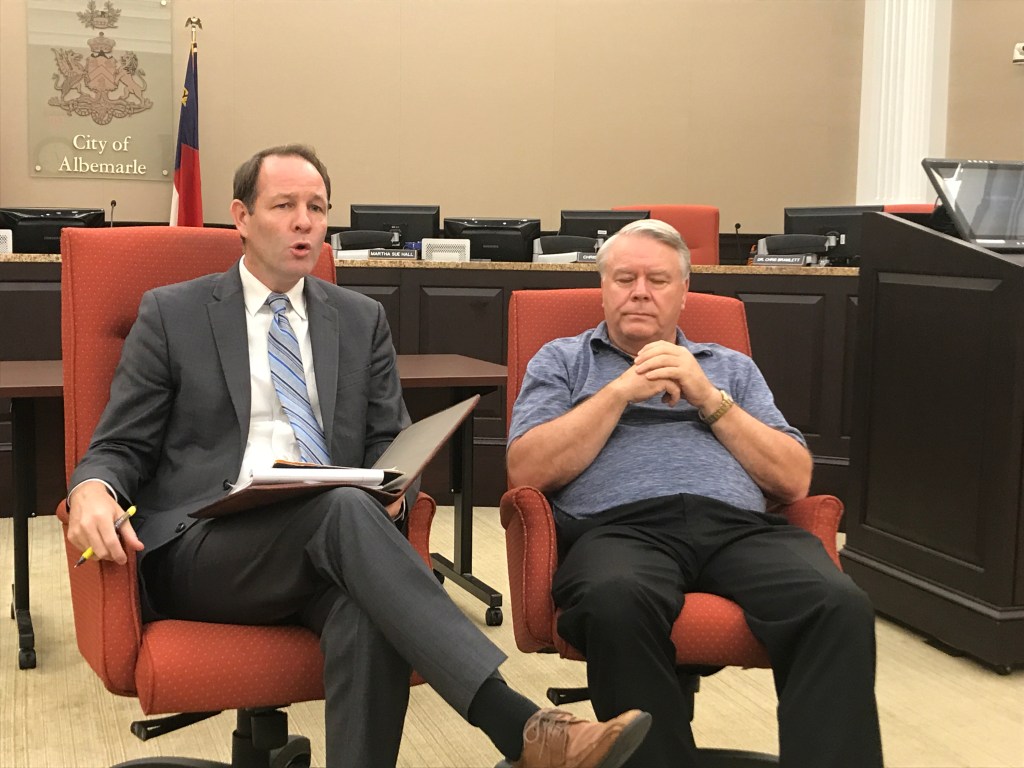 Seating space was scarce Monday night at the Albemarle City Hall during a community meeting to discuss Pfeiffer University’s impending downtown Health Sciences Center and the many students that would be arriving.

The center will house programs in physician’s assistant studies and occupational therapy. The facility should be ready sometime late next summer. When the programs are operating at full capacity, there will be between 250 to 300 students in the downtown area every day, Pfeiffer President Dr. Scott Bullard said.

Facilitated by Mayor Ronnie Michael and Bullard, Pfeiffer graduates and professors, downtown business owners, concerned citizens and city officials showed up to the meeting to ask questions and voice concerns on a range of issues.

One of the biggest throughout the night was about housing and how students would be able to live in Albemarle at an affordable price.

“We are going to emphasize to them that the best thing for them would be to live very close to campus,” Bullard said.

“There’s several people out here tonight that have been talking about building apartments,” Michael said. “We are hoping that you will go forward with that after you leave this meeting.”

The Albemarle Hotel is already in the process of being transformed into several apartments and retail shops. Construction should start in the first quarter of 2020 and be completed within the first six months of 2021, said Mark Donham, director of economic development for the city.

“What kind of housing options are going to be attractive and appealing and where can we bring it so that it can create the type of livable, pedestrian-friendly space that we want?” said Carla Weyrick, a Pfeiffer graduate and Albemarle native who lives in Charlotte.

“We have a beautiful opportunity to really become a landmark community that services residents that have special needs” with the occupational therapy program, added Weyrick, who has two children with special needs.

Several people ascribed to the idea that as long as the demand is needed, housing will be available to the students.

“I guarantee you we will have housing ready for these students when the time comes,” Albemarle City Councilman Chris Bramlett said.

The students that will be arriving will often be older (mid-to-late 20s) and will likely already have families of their own, so much of the discussion centered on attracting services and businesses that cater to a younger audience.

Ideas brought up included building a dog park and playground in the downtown area along with bringing casual college-friendly eating establishments such as pizza, ice cream and sub shops to the area.

“I would hope someone in retail would look at that,” Michael said.

Unlike much of current downtown Albemarle businesses, many of these places will need to stay open at night because many of the students will be getting out of class in the evening and will want a place to eat or get a haircut.

Bullard talked about bringing to the downtown area businesses where students could hang with each other on a Saturday night after schoolwork is completed and simply “have a release.”

Benny Bowers talked about the importance of bringing more economic activity to Albemarle and Stanly County to attract young people to come back to the area.

“We don’t have the opportunity for enough of our young people to come back home right now,” he said.

He said that though Pfeiffer coming to Albemarle is great, “we have to do more.”

In preparing for the new campus, Michael said the city has been buying different properties to develop into parking. The city has hired an engineer to examine current downtown parking and look into the possibility of remarking streets, including transitioning from parallel parking to angle parking in certain areas and adding one-way streets.

“There is no better place on this Earth to live than an academic community,” Bramlett said. “I think Albemarle will soon be the envy of every small city and town in N.C. because we will have that.”

Pfeiffer has raised about $1.3 million in confirmed gifts and pledges for its new health sciences graduate facility and aims to raise around $7 million.

Stanly County, as opposed to many of its surrounding counties, has a four-year university located within its boundaries.

Albemarle officials have been talking with two other cities — Spartanburg, S.C. and Marion, Va. — that have gone through similar processes of bringing a university campus to their downtowns. The city plans to present their findings from Monday’s meeting to those officials.

“We’re wanting to learn from their mistakes and what worked for them, too,” Michael said.

The city and the university are engaged in a relationship where each needs the other to succeed, Bullard said.