Stanly again ranks no. 1 in opioid overdoses in the state

Stanly County once again led the state in opioid overdoses for the month of July, according to data from the N.C. Department of Health and Human Services.

In what is becoming a reoccurring pattern, Stanly County once again led the state in opioid overdoses in July.

Stanly had the highest rate of opioid overdoses showing up in hospital emergency rooms, according to data released by the N.C. Department of Health and Human Services. Union, Robeson, Buncombe, Davidson, Randolph, Pitt, Rowan, Mecklenburg and Alamance rounded out the top 10. Stanly led the state in overdose rates for many months last year and already this year.

Stanly had 12 people overdose in July, an uptick from the four in June but not as much as the 15 people who overdosed in May. 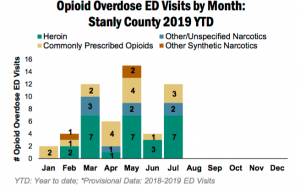 Stanly County’s overdose numbers have varied dramatically month to month this year, according to data from the N.C. Department of Health and Human Services. (Contributed)

People who overdose do not always go to the hospital and thus would not be included in the monthly reports, Stanly County Sheriff Jeff Crisco said.

“Some victims choose to go to the hospital where some victims, no they won’t,” Crisco said.

Crisco said this could contribute to the inconsistency in the reported numbers from month to month.

The good news is that less people have overdosed from January to July of this year (55 people) than during the same period last year (63).

Statewide, 547 overdoses have been reported this year through July, down from 567 for the same period last year.

Of the 12 overdoses, seven were from heroin.