Hundreds of students receive school supplies during back to school event 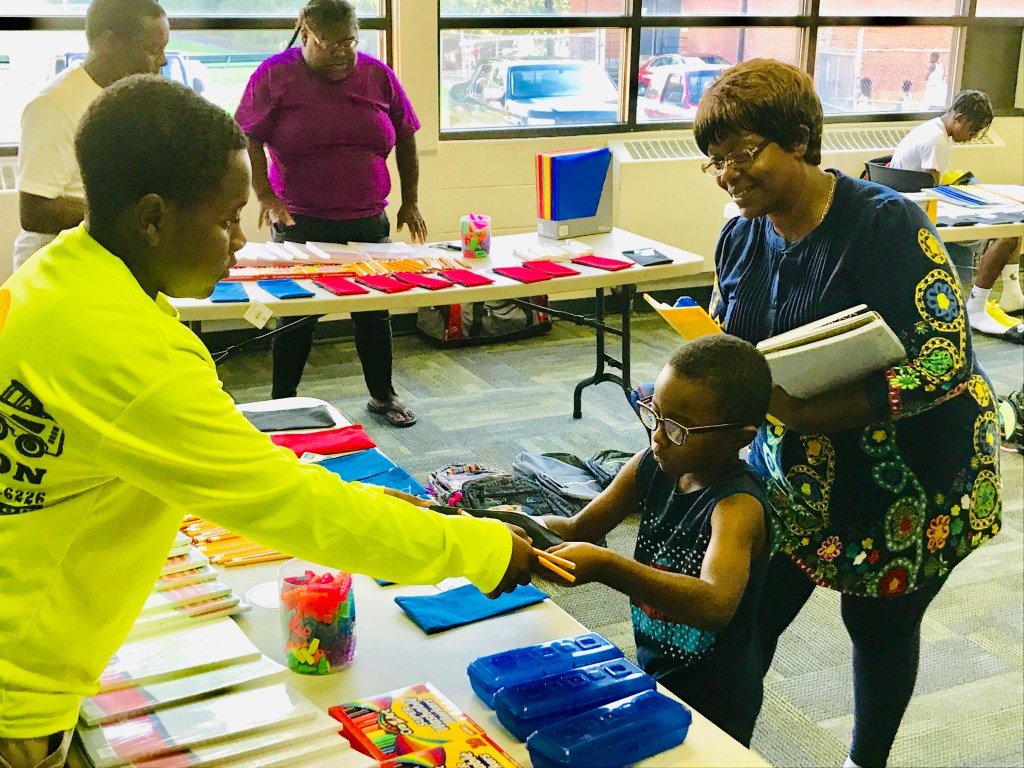 AJ Harris passes out school supplies to 5-year-old Prince Rogers and his grandmother Faye Baker during the back-to-school event at the E.E. Waddell Community Center.

The E.E. Waddell Community Center was filled to capacity last Thursday evening during a back-to-school celebration hosted by the Albemarle Parks and Recreation. More than 300 students and their families were in attendance — so many that there were not enough seats and throngs of people were forced to stand together along the sides.

The ceremony started off with several dances from the Extreme Flames, a local dance group, and Team No Sleep, a community service group comprised of 20 kids. 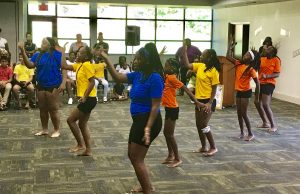 The Extreme Flames dance group entertains the crowd during the back-to-school event at the E.E. Waddell Community Center.

While the festivities were happening inside, Albemarle police officers were outside cooking hot dogs for everyone to enjoy.

After the entertainment, the students — who ranged from rising kindergarteners to those entering ninth grade — were provided book bags and school supplies for the upcoming school year.

The supplies were donated by groups, including Albemarle Parks and Recreation, the Albemarle Police Department, Team No Sleep, local churches and the Denico Autry Foundation.

“A lot of individuals in the community don’t have the means to get the necessary school supplies and so they depend on programs like this,” said Keondra Ellis, one of the adults involved with Team No Sleep.

Faye Baker, grandmother to Prince Rogers, 5, who will be starting kindergarten at Norwood Elementary, was thankful for the event.

“It’s a blessing,” she said. “We all come up short somewhere down the road, so events like this help.”

Many of the kids were excited about both the event and about school starting back.

Zayden Thomas, 10, who will be a fifth-grader at Oakboro Choice STEM School, said he is most looking forward to lunch and recess when school opens Monday.

Shammah Charles, a member of Team No Sleep and a rising sophomore at Albemarle High, is looking forward to continuing the positive momentum he generated at the end of last school year.

Many of the kids from Team No Sleep passed out book bags, notebooks and pencils to students and their parents. They were involved “so they can learn it’s just as important to give as to receive…and learn how to be part of community inclusion,” Ellis said. 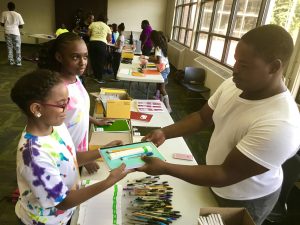 Kristin Lilly, owner of Micah’s Sweet Escape, spoke at the celebration and emphasized the importance of being involved and getting a good education.

“You have to go out and make a difference in your communities, in your schools, around your peers,” she said. “It’s okay to stand out.

“The best thing you can do for yourself and for your family is to go out and get a good education.”