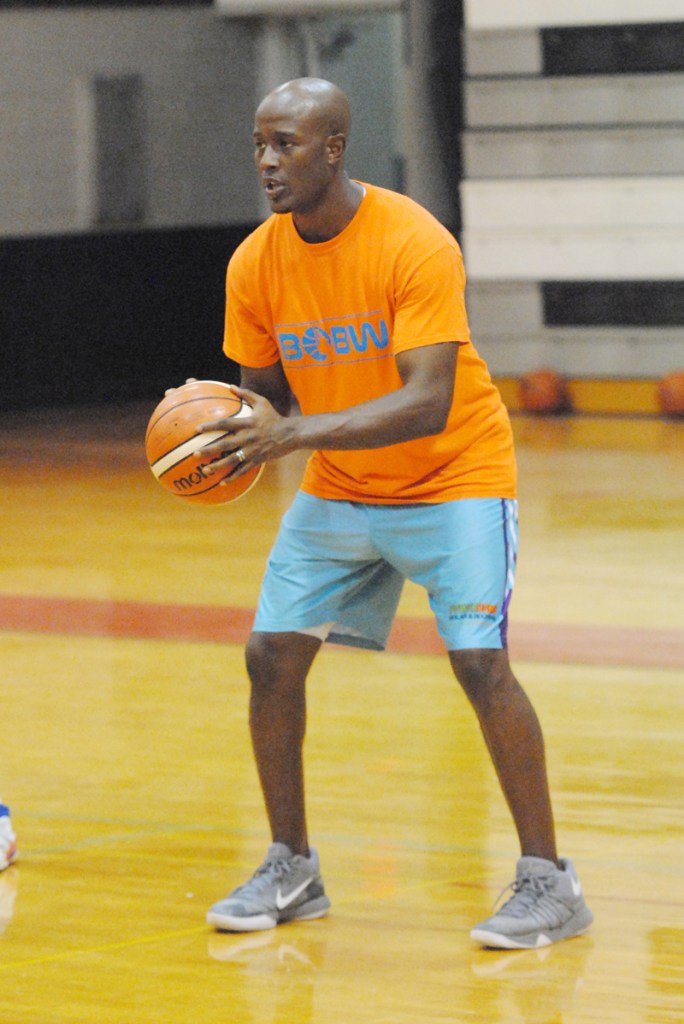 Rico Grier, a former All-American basketball star with Pfeiffer University, shows the proper alignment for shooting the basketball at the Best of Both Worlds camp.

Dave Davis
Dave Davis served as the Falcons head basketball and head golf coach from 1996-2010. During that span, Pfeiffer’s basketball teams compiled a 284-124 record and won six conference titles and made three NCAA Division II Tournament appearances including the Elite Eight in Bakersfield, California in 2004.

As golf coach, he coached the Falcons to numerous tournament championships, six All-American’s and had two National Players of the Year. He also had one golfer play on the Walker Cup Team and one play in The Open Championship.

Rico Grier
Big brother to DeMario Grier and an outstanding athlete in his own right, Rico Grier led the Falcons to an appearance in the NCAA Elite Eight in 2004. He stands in the career Top 10 in eight different categories including second place in both assists and free throw percentage.

Rico is fourth all time in career points scored (2,013) and was selected the conference Player of the Year. He earned All-State and All-Region honors, and along with his brother was named to the All-Time CVAC Men’s Basketball Team.

Dickie Myers
Dickie Myers was a standout baseball player for the Falcons from 1971-75.  Playing at first base and pitcher, Myers was an all-conference selection in 1973, 74 and 75.

He collected All-District awards in each of his four seasons in Misenheimer and was the conference player of the year in 1974 as well as an All-State selection.

Myers also collected an All-America Honorable Mention award for his play in 1974.

Doug O’Brey
Doug O’Brey played baseball for the Falcons from 1981-1983.  Following his career at Pfeiffer, he played in the Albany Twilight Baseball League for 15 years, earning All-Star status on six occasions.

He went on to coach at the college level for more than 30 years and in 2013 was enshrined into the New York State Baseball Hall of Fame.

Charlene Reid
Charlene Reid was a standout for the Pfeiffer women’s golf team during her career, which ran from 2006-2009.

She was a four-time all-conference performer over her career and also earned All-Region and All-American accolades in 2009.

That same year, she shot a four-day total of 300, finishing just two strokes behind the national champion to claim the Individual Runner-Up at the 2009 NCAA Division II Women’s Golf Championship in Findlay, Ohio.

David Smith
David Smith was an outstanding high school athlete, excelling in both tennis and basketball.  He played tennis at Pfeiffer from 1966-1969 and while in Misenheimer, he was named as an all-conference selection for three years.

He captured the 1967 and 1968 conference titles and was also an all-district doubles champion in 1968, qualifying for the National Tournament that same year.

Following his time at Pfeiffer, he continued playing tennis, winning several local and regional tournaments through the 1970s and 1980s.  In 1983 he achieved a Top-5 ranking in North Carolina.

He would later return to Pfeiffer in 1996 and served for 12 years as the Vice President for Enrollment and would later serve as head coach of the Pfeiffer men’s and women’s tennis teams.