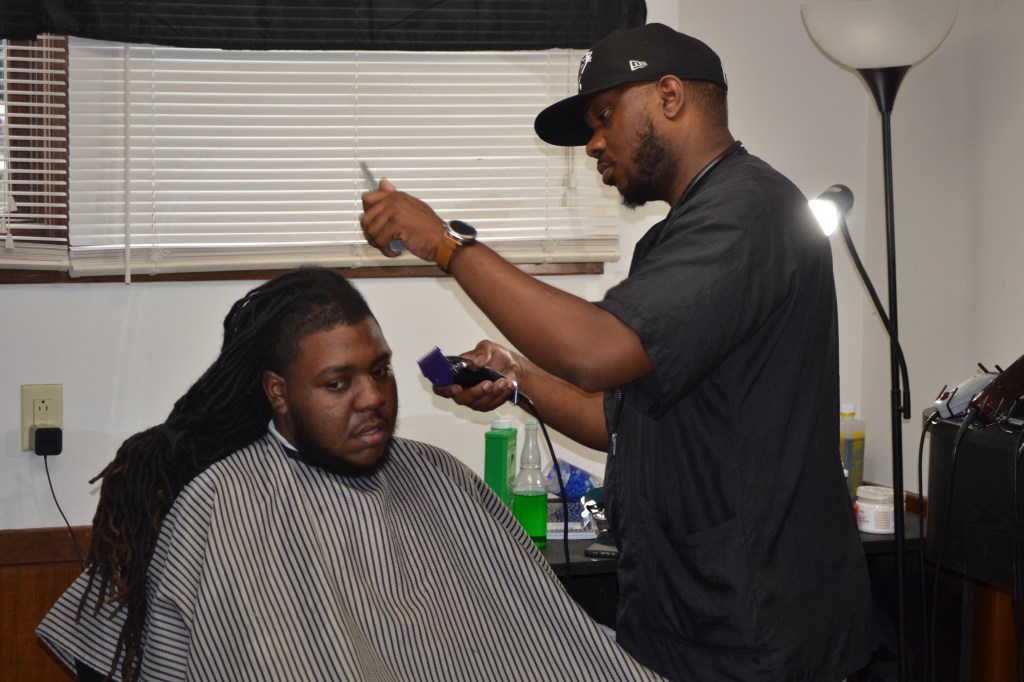 A new barber shop opened in the downtown Albemarle area on Friday.

@TheShop, owned by Kedrick Pemberton, had its official grand opening Saturday. It is at 234 E. North St.

For Pemberton, 31, opening his own shop was a long time coming.

Originally from Oakboro, he graduated from the Hairstyling Institute of Charlotte and has been cutting hair for roughly 11 years. He worked at Tillman Barber Shop in Albemarle for many years before deciding earlier this year to open his own business. Pemberton, his wife and their children live in Albemarle.

He said he enjoys interacting with and getting to know his clients. 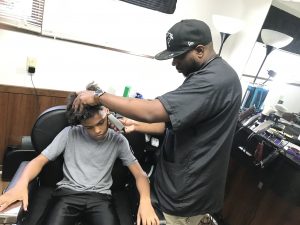 Pemberton has a strong following.

“He built up his clientele,” Nekeyra Srail, his sister, said.

Pemberton cut hair for 14 hours during his first day in business.

He plans to be open by appointment Monday through Friday and from 7 a.m. to 6 p.m. Saturday.

In the future, Pemberton said he would like to add more barbers.

During Saturday’s grand opening, when everyone was celebrating outside — enjoying free hot dogs, popcorn, snow cones and face paint — Pemberton was inside, studiously chatting up customers and cutting their hair. 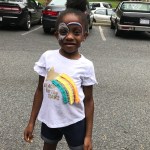 Five-year-old Kensley Little of Albemarle got her face painted. 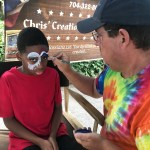 Marquis Jackson appreciates that Pemberton takes his time when cutting his hair.

“He does it right,” Jackson said.

Though the event was open to the community, it was very much a family affair. All of Pemberton’s family members wore @TheShop T-shirts detailing their relationship to him.

For many in attendance for the opening, a barber shop means more for the black community than just a business.

“It’s been the place where the men go to learn about being a man,” Dexter Hinson said. “You see people from different walks of life…it’s kind of like the level place where everybody can meet to talk…it’s the centerpiece of the community.”

Hinson said people will even go to the barber shop not for a haircut but simply to talk with friends and discuss what’s happening in the community.

He is a customer of Pemberton’s and they like to talk about their basketball rivalry: Hinson is a Duke fan while Pemberton is a UNC fan. 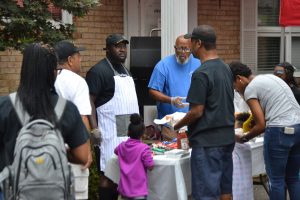 For Pemberton, a barber shop is “somewhere where the people in the community can come, be safe, have a good time and get a haircut.”

Pemberton wanted to open his own business for several years, but he couldn’t find the space, his wife Patrice said.

“I’m glad he was able to make his dream come true,” she said.

The business “means a whole lot to him now that he has something he can call his own,” said his stepfather Pee Wee Stokes, who has been getting his hair cut by Pemberton for 18 years.

New businesses in the city can help inspire young black kids, said Kristen Lilly, owner of Micah’s Sweet Escape, who was serving popcorn and snow cones at the grand opening.

“New business is always good but it’s always good to see black entrepreneurs,” Lilly said. “That’s important to our community because it teaches our kids that they can grow up and do these same things.

“Children in minority communities need more role models,” she said. “What better way for a minority child to say, ‘Hey, I can identify with someone that’s like me…and when I grow up I can do these same things.’”

“I think it’s awesome,” added Joy Almond, Main Street Manager and director of the Albemarle Downtown Development Corporation (ADDC), about the opening. “I want our downtown to be diverse and welcome to everyone.”

Pemberton teamed up with Stanly Lodge 88, Micah’s Sweet Escape, Chris Almond and the Sharp Men for the grand opening.

Sharp Men is a 12-person organization devoted to helping young people in the county. They talk to kids about important, relevant issues like gun violence and gangs.

“Anything positive in the community we get involved with,” member Tim McAuley said.

Pemberton has cut McAuley’s hair for five years. McAuley likes him because they share the same values.

Pemberton’s 12-year-old son Quron enjoys receiving fades and shape-ups from his dad and was enthusiastic during the grand opening.