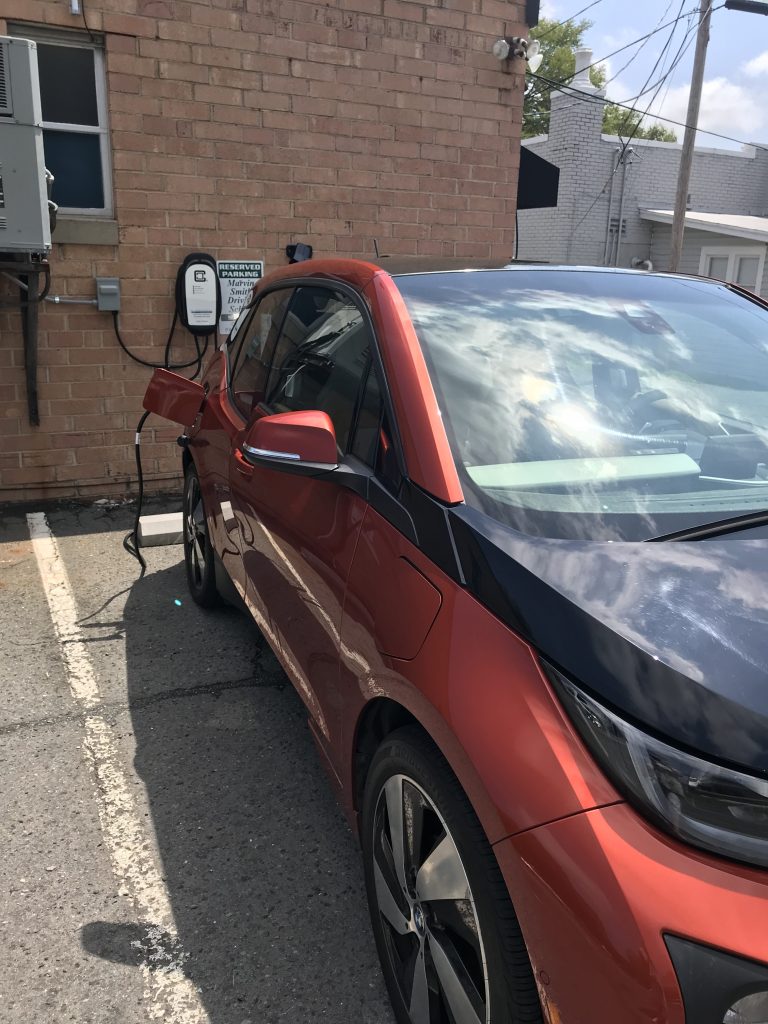 A BMW gets charged at a station at Marvin Smith Driving School in downtown Albemarle.

The station, at Marvin Smith Driving School, was installed this month.

Smith said he got the idea from his son, Rocky, who recently purchased a Tesla. Smith’s son works as a smart cities engineer for Cisco, where he travels the world helping cities to improve their communication systems so they run seamlessly. He recently returned from a trip to Barcelona.

“We were like a giant hole in the middle of North Carolina where someone with an electric vehicle couldn’t pull up and charge,” Smith said.

Smith hopes the station becomes a destination for many electric vehicle owners. He explained that since his school is in downtown, people can come to the area and spend time exploring the city while they charge up.

“While they’re charging here in downtown, they could spend a few bucks at Second Street Sundries, walk around near the square, or attend volunteer day at the library,” Smith said.

Electric vehicles will travel up to 40 miles on an hour charge. The vehicles must charge for about 10 hours for full capacity. Some cities like Charlotte and Asheville have installed superchargers that can fully charge an electric vehicle in an hour.

Stanly County residents Ron and Nancy Bryant have owned a Tesla, the first one registered in the county, for a little more than a year. They said they have a charging station at their home, but the one in Albemarle could be useful for them in an emergency.

“It needs to be publicized,” Nancy Bryant said. “The county needs to get the word out.”

The Bryants believe the number of people who own electric vehicles will go up, as the market for them grows. According to Ron Bryant, there are around 40 electric car models on the market right now. Many believe electric cars are out of their price range, but the Bryants said this is not the case.

“These vehicles have been in the market long enough that there is now a used electric car market,” Ron Bryant said.

The Bryants have been environmental advocates for more than 30 years. They used Google to find an affordable used Tesla Model S that was perfect for them, they said.

They said the main reason they bought an electric vehicle was to cut down on the use of fossil fuels.

“That’s the whole core of it, that fossil fuels are the primary cause of the climate crisis. Period. Case closed,” Nancy Bryant said.

Ron Bryant said he saw an ad two months ago for three Chevrolet Bolt EVs, the automaker’s latest model of electric vehicles, priced at $12,000 each. He said he drove by again recently and they were still remaining.

“It’s a crying shame, literally, that those three cars are still sitting there. And there are people driving 12 and 14 mile per gallon vehicles back and forth to work 20 miles a day. There’s no excuse for that.”

Smith believes the number of people who own electric cars will increase dramatically in the next few years. While there are only a handful of electric vehicles registered in Stanly County, Smith wants his charging station to become a destination for drivers, instead of just a stop.

“This is just a convenience,” Smith said.