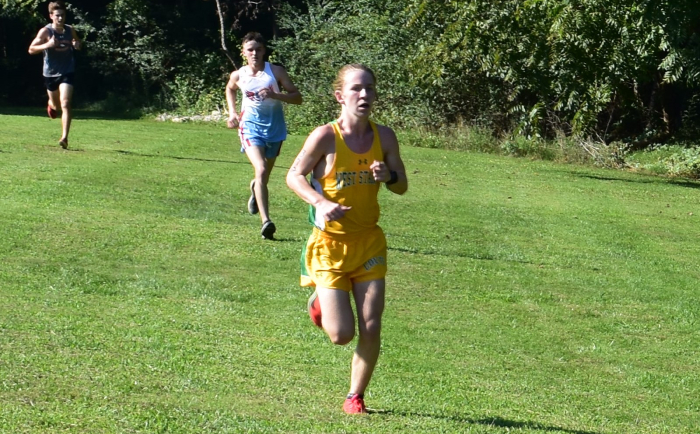 West Stanly sophomore James Shue (right) and Nick McClure of North Stanly at the half way point at the Vac & Dash XC Clash.

The field of runners from 1A, 2A and 3A traditional high schools, charter schools and home school ran the hilly course in three different races

The varsity boys ran first with South Stanly’s Ranfere Garcia leading the way for the first half of the race. Asheboro’s Michael Britt shadowed Garcia to get a feel for the course.

On the second lap of the challenging course, Britt passed Garcia and pulled away for the victory. The Blue Comet runner ran the 3.1-mile course with a time of 19:26.

With the top ten runners earning T-shirts and medals, Nicholas Paschal of Asheboro edged out Salisbury’s Michael Lowry 20:37 to 20:38 to round out the top ten.

Hope Hembree of East Lincoln was the next runner to cross the finish line with a 24:41 race.