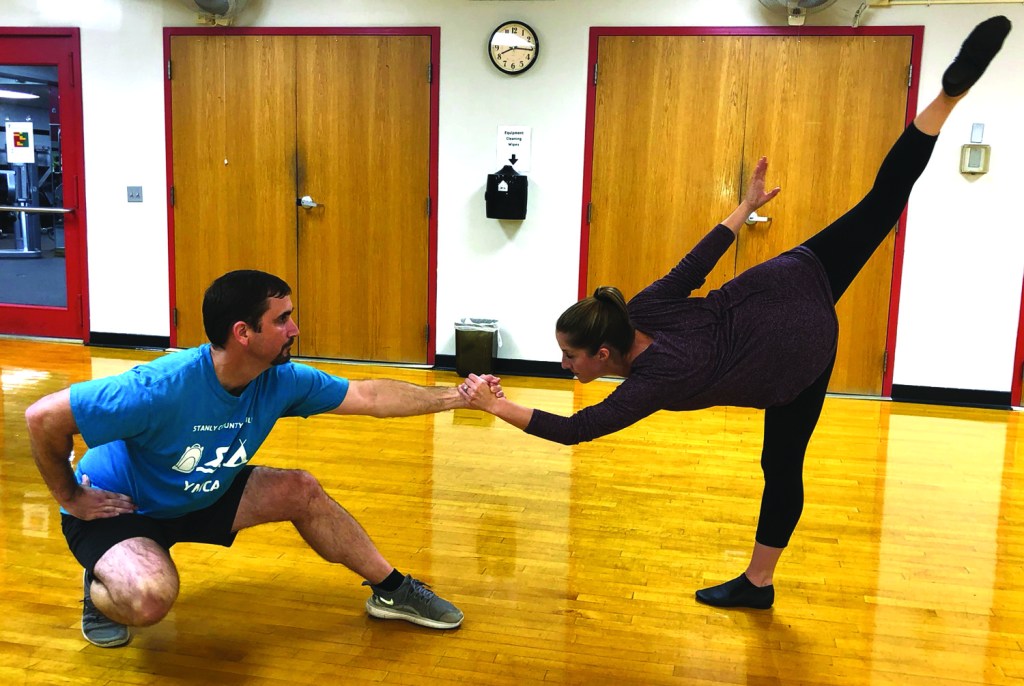 Todd Swaringen, left, and Misty Huneycutt practice for the Stanly County’s Dancing with the Stars competition.

Dancers are making their final preparations for Saturday’s Stanly County Dancing with the Stars event.

“I was actually asked by one of my colleagues about doing it and jokingly I was like, ‘Yes,’ ” Benson said. “You know, a quick answer. And lo and behold I’ve been doing it since then.”

Benson has no regrets.

“When I started, I was thinking I’d do it, no problem. I’m here, it’s my hometown. I’m always finding a way to give back to the community, to Albemarle,” Benson said. “But I was thinking, ‘Goodness, this is like Broadway — like the real deal.’ It’s a lot of work. A lot of practices after practices after practices. It’s just one of those things that if you sign up for it you just need to be aware that it’s a lot.”

Benson has been busy with the beginning of the school year and parenting his son, juggling his responsibilities with fundraising and practices for Dancing with the Stars — all while commuting from Charlotte.

“Being part of this event will teach you discipline and working with others and being part of something great,” he said.

Benson and his dancing partner, Louisa Jane Hartsell, held a luau as a fundraiser. He credits her with leading the fundraising portion. Their luau, held at a Stanly resident’s home, included food, a DJ, door prizes and more.

Benson and Hartsell selected their own theme. No couple will know their competitors’ themes until a dress rehearsal on Friday, he said. The two have been busily working with a choreographer to perfect their routine.

“This is for a great cause,” he said. “It’s fun, it’s a lot of work, it’s energetic, so everyone is, you know — it’s a great way to bring people together for a great cause.”
Benson said his family and co-workers will attend the event. 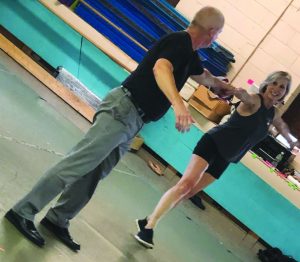 Ashley and Micki Thompson work on their routine for Stanly County’s Dancing With The Stars. The event is Saturday at the Agri-Civic Center.

Micki Thompson and her husband, Ashley, will also participate. Micki works in the Basic Law Enforcement Training program while Ashley is the chief deputy at the Stanly County Sheriff’s Office.

Both are fitness instructors for law enforcement cadets. Their students named them TNT, so the couple has adopted the name Team TNT for the event.

They have practiced three to four days each week, working with Melissa Zaleski, director of Melissa Kathleen’s School of Dance. Zaleski helped them work on a hip hop freestyle with four songs. They also squeeze in extra practices at home as they are able.

The Thompsons have raised money through selling plates during a barbecue chicken fundraiser and having a softball tournament. They have also collected individual donations and expect to receive a donation from Walmart.

They have little formal dance experience.

“I love to dance,” Micki said. “I’ve been dancing since I was little, tiny. Any time there’s music, I’m dancing. Our friend Jody (Crisco) knows that, so when she was thinking of names and couples she thought of me. We’ve taken shag dancing classes together and have been married 28 years, together 33 years…. (Ashley) loves to dance with me, so no hesitation.”

The couple began practicing in June.

They have attended previous Butterfly House fundraisers and have donated money, but this is their first time participating in an event as extensively as they are with Dancing with the Stars.

“The thought of dancing on the stage in front of everybody is kind of scary,” Micki said. “We’re ready. We’ve got it.”

They have several relatives and friends attending. Crisco, their fundraising coordinator, will attend with her husband, Sheriff Jeff Crisco. She has been “instrumental” in the fundraising process, Micki said.

“We owe her a great debt,” Micki said. “She is a great friend. She and Jeff have gone above and beyond helping us with that.”

While they are nervous about performing, Micki and Ashley are both honored to help.

“We’re excited to participate and privileged to be able to help in the fundraising efforts for such a worthy cause,” Micki said.

Atrium Health-Stanly is the lead agency for the Butterfly House Children’s Advocacy Center. The center provides evaluation and supportive services for possible victims of child maltreatment, such as reported sexual, emotional and physical abuse, neglect, drug endangerment and witnesses to a violent crime.

The event will take place at 7 p.m. Saturday at the Stanly County Agri-Civic Center. The doors will open at 6 p.m. and the event will end around 9 p.m.

Tickets are $30 per person for mezzanine seating and $20 per person for balcony seating. Tickets can be bought by calling the Stanly Health Foundation office or at Starnes Jewelers on Main Street in Albemarle.

To vote on a favorite couple, visit stanlydancingstars.com. Alternatively, voters can call the Stanly Health Foundation office at 980-323-4103. Each vote costs $5.