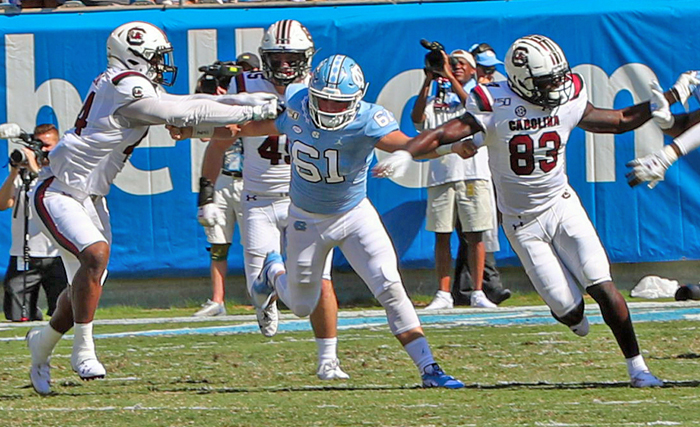 His name may not regularly show up in a box score, even when in high school, but Drew Little’s skills at longsnapping have led him to the highest level of college football.

A former standout longsnapper and linebacker at North Stanly, Little was just one of three true freshman to start for the North Carolina Tar Heels football team last Saturday against South Carolina.

Little said taking the Carolina Panthers’ home field on Saturday was the experience of a lifetime.

“I have dreamed about playing for Carolina. (Saturday) was a dream come true. I’ve worked hard for it and I love it,” Little said. 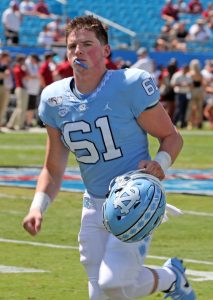 Drew Little comes off the field at Bank of American Stadium after warmups last Saturday before the game. (Contributed)

The longsnapper position is a speciality position in which a player becomes the center of the line for special teams plays like punts and field goal attempts.

Where punt snaps go back about 15 yards, field goals and extra points are about seven to eight yards.

Little’s journey to the Atlantic Coast Conference did not come without a great deal of work above and beyond what he did in the regular course of football practice for the Comets, he said.

Practicing 45 minutes a day four to five days a week on just longsnapping, Little drilled himself trying to perfect his technique and form. This was after a great deal of time working at linebacker for the Comets during the team’s recent successful years.

“During practice in high school, I had to run the defense and stay on top of that, watch film, then work on snapping before going home to do homework,” Drew said.

Though the Tar Heel true freshman can walk around campus anonymously, he added his temamates treat him like any other player.

“When they see me snap the ball, they are like, ‘Wow! That takes (good) technique,’” Little said.

Drew also credited his father, North assistant coach Chad Little, along with head coach Scott Crisco and the Comet staff for work they did with himself and others behind the scenes to get college opportunities. Many weekends, coaches took players on visits and workouts to differnt college tryouts.

Chad Little said his son had to forego many of the regular activities kids in high school do on weekends like fishing in order to work on his skills.

“He always sacrificed his time. When his friends went to stuff on weekends, he elected to go to camps. He was always snapping, working,” Chad said.

Drew’s work ethic was based on another famous Comet player, running back and current Carolina teammate Antonio Williams.

Drew’s number-one goal, Chad said, was to play football for the Tar Heels, which started at around nine or 10 years old. He said he and his wife, Rebecca, promoted their son but Drew did all the work.

“All we could do was recommend him. He thinks we did something but he is self-made,” Chad said.

“You have to have good grades, a good attitude and good people.”

This weekend, Drew takes his home field for the first time when Carolina hosts Miami.

Running out of the tunnel will be a special moment, Drew said.

“I’m always going to remember it.”