Former Marine steps up for students, named Teacher of the Year 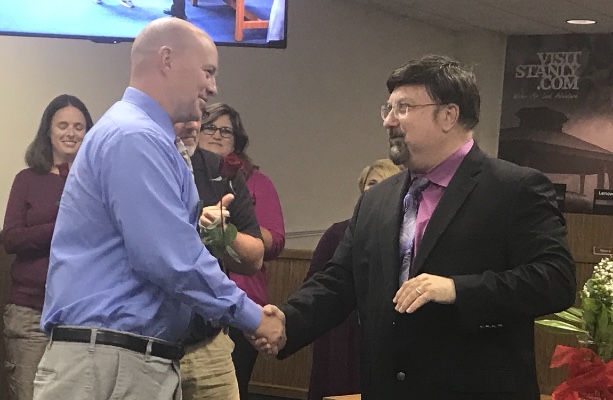 Michael Curlee shakes hands with Dr. Jeff James after being recognized as Stanly County Teacher of the Year.

When Michael Curlee arrived at Parris Island, S.C. for Marine Corps boot camp, he had just turned 19 and had floated through life.

He was not a fan of school, was indifferent about his grades and had dropped out of Stanly Community College.

His world was soon rocked when, during a platoon inspection, a drill sergeant picked out several flaws. Curlee had a loose string on his shirt, the back of his neck wasn’t fully shaved and he messed up during his rifle drill.

But it was the sergeant’s words that stung Curlee the most. “He said, ‘you’re unsatisfactory.’ ”

As Curlee spent time processing the sergeant’s words, he had a choice to make. He could remain unsatisfactory and continue floating along through life or he could take control of his life and make sure this type of scenario with the sergeant never happened again.

He chose the latter.

At the end of the year, during his last battalion inspection, “it seemed like everything went perfect,” he said.

Ever since that initial Marine inspection, Curlee has worked in all aspects of his life to avoid failure, which he calls his greatest fear.

His dedication was rewarded during Tuesday night’s school board meeting, when he was recognized as the 2019-2020 Stanly County Teacher of the Year for his work as a special education teacher at South Stanly High School.

“When they announced my name, I was floored,” he said. “I was very surprised.”

But many who know him are not.

“Mr. Curlee goes above and beyond for the overall well-being of all students,” former SSHS principal Tanya Crisco said. “He strives to understand the perspective of students and the challenges they individually face while developing their character in the classroom, in the athletic realm and in the scope of what lies beyond South.”

Superintendent Dr. Jeff James considers Curlee a model of what a teacher should be.

“He is not here for the money, he truly loves the kids and it, in my opinion, is his calling,” James said. “It’s a career, not a job to Mike.”

Originally from Union County, when Curlee graduated high school he didn’t know what he wanted to do with his life.

After he graduated with a degree in social work from the University of North Carolina at Greensboro, Curlee moved around the state as a probation officer, parole officer and with the Department of Social Services.

Ironically, he found the profession he loved was the one he disliked as a kid.

“I think God has a sense of humor, putting me into teaching when I was not a fan of school,” he said.

He began working with students with behavioral and emotional difficulties at Northwest Guilford in Greensboro. Since then he has worked as a special education teacher at Butler High and South Stanly Middle. He has been at South Stanly High the last year and a half.

In the classroom, his strategy is simple.

“It’s get to know the students and let them know you care about them,” he said.

Though a lot has changed since Curlee was in school, one thing remains constant.

“He was my coach, my friend, my mentor and a true role model, “ Cade Whitley, a freshman at Wingate University, said. “He is someone I continue to look up and never want to disappoint. He is a father-figure and I know I can always count on him to be there for me.”

Whitley Love, who graduated from SSHS last year, remembers the dedication Curlee brought to coaching girls’ soccer, even though he knew nothing about the sport. In a single year, he transformed the team from one that was winless in the conference into one that placed second in the conference, secured 13 wins and made the playoffs.

“He works day and night for his students and athletes, and I truly mean it when I say he wants the best for them,” Love said. “I, unfortunately, will no longer get to experience his bright personality because I have moved away to college, but I know one thing: I will never forget what Mr. Curlee has done for me.”

With many students coming to school with different kinds of worries and stressors in their lives, Curlee hopes to “maybe be a light to a couple of them…and maybe brighten up their day.”

He works to get to know not just his own students, but every student he comes into contact with.

Curlee, currently coaching wrestling and cross country, appreciates the relationships he has formed as a coach that have allowed his students to trust him more as a teacher.

“If you can get them to trust you and see you outside of the teaching aspect and see that ‘oh wait, he does care about me’ and form that relationship with them, it makes it a whole lot easier to teach them in the classroom,” Curlee said.

His most gratifying moments as a teacher are knowing the relationships he has formed with students last well after they have graduated. He enjoys when past students visit and strike up conversations with him.

“I still have some that I’ve coached that have now grown up and have jobs of their own,” he said.

Recalling memories of his first platoon inspection, he tells his athletes to never accept anything less than the best for themselves — advice he listens to himself.

He recently imparted advice to his cross country athletes before a meet.

“Your legacy starts now,” he said. “When somebody says your name, what are they going to think about you?”

When people now think about Curlee, they think Teacher of the Year.