Heidi Grant is a 1987 graduate of Pfeiffer University. She has worked for the U.S. Department of Defense for almost 30 years and was working in the Pentagon when it was attacked on Sept. 11, 2001. Grant will speak at Pfeiffer on Oct. 6 as part of the university’s Dinner Speaker Series. As the 18th anniversary of 9/11 approaches, Grant answered questions from The Stanly News & Press about her memories of that day and how it shaped her life. Her answers have been edited for brevity and clarity. 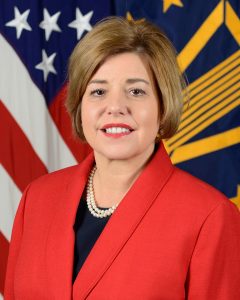 On Sept. 11, 2001, I had been working in the Pentagon for 12 years. I was the lead budget analyst (GS-15) in the office of the Secretary of Defense (Comptroller) for Contingency Operations and Combatting Terrorism.  While most of my daily work focused on justifying funding requirements for overseas military operations in Bosnia and Kosovo at the time, my efforts quickly turned toward efforts to respond to the terrorist attack in New York City.

Shortly after the hijackers flew the plane into the northern facade of the North Tower of the World Trade Center in New York City at 8:46 a.m., I was called to attend a meeting in the Pentagon with several experts (military, policy, legal advisors) to give funding/authority advice on the Department of Defense immediate response plan.

After a few minutes into my meeting, the Pentagon was attacked. It was 9:37:46 when Flight 77 crashed into the western side of the Pentagon and started a violent fire. I could feel, hear and smell the impact. My colleagues in the meeting and I decided to evacuate the building as soon as possible. However, our choice was to either exit through the closest exit to the courtyard (known as ground zero) or the next closest exit — Mall Entrance. The office I was in was between corridor 5-6 on the B ring. At the time, I didn’t know how close I was to the impact. I chose the mall entrance based on my concern of a potential additional attack. When I exited, there were plane and building debris everywhere. People were exiting the building panicked, bloody and disoriented. I made it safely away from the building to the road where traffic was stopped along the main highway next to the Pentagon going into D.C. (395).  Cars were littered with debris. All traffic was blocked from entering the city over the memorial bridge.

Looking back almost 20 years now, what do you most remember about that day?

My thoughts immediately went to my 3-year-old daughter, Abigail. She was at a childcare center, Triangle Tots, in the Ronald Reagan Building, right next to the White House. My motherly instinct kicked in and I ran in my dress and heels across the memorial bridge, down Constitution Avenue to find Abigail (3-mile run). After significant push back from police, not allowing anyone to enter the city, I continued my journey. I recognized a little girl from my daughter’s class being carried out of the city on a man’s shoulders. The man was able to direct me to the location near the Washington Monument where the children were with staff (pretending to have a picnic) after evacuating the building. When I got there, the staff informed me Greg (my husband) had picked up Abigail shortly after 9 a.m. (He had a feeling it was going to be a crazy day and left work early to bring our daughter home). While I was elated, it was the first time I thought he may be worried about me. I borrowed someone’s phone and could not get through. I stayed with the staff to help with children whose parents could not get to them. Later in the afternoon I went into the Reagan building to call home to let my family know I was safe and received a ride home around 6 p.m. from one of the parents who lived near me.

What I remember most about the day after is the outpouring of love, patience and support strangers had for each other. We were a nation united. Every bridge on the way to work had American flags hanging. The George Washington Parkway was lined with candles. My boss, friends and family called to see if I was okay. I felt such a sense of national pride and a true love for the United States.

How has surviving the attack changed your life and shaped the person you are today?

My “purpose in life” was confirmed that day. I knew I needed to use my expertise to ensure our warfighters have everything they need to protect the freedoms we enjoy. Since 9/11, I have sought out opportunities where I can make a difference in ensuring the U.S. has the most lethal war fighting force in the world, along with capable international partners and allies. I don’t want anyone to ever experience the sense of fear of the unknown I experienced on 9/11.

What is your current role?

I have worked as a career civilian for the Department of Defense for almost 30 years, the last 17 as a Senior Executive Service Member. I now work for the Under Secretary of Defense (Policy) as Director of the Defense Technology Security Administration (DTSA). My organization of about 200 people plays a vital role in protecting the international transfer of critical information and technology in support of our national security.  We ensure U.S. military technological advantages are preserved, build partner capability and capacity and preserve the U.S. industrial base.

As we near the anniversary of 9/11, what do you want people to know or remember about that day?

We live in the greatest nation on earth. I wish every day in the U.S. was like the days/weeks after 9/11. There was a spirit of service and countless acts of kindness and decency. I am inspired every day by the heroic sacrifices of our firefighters, rescue, law enforcement personnel, military service members and civilians. Every citizen has a role to play to ensure we remain the greatest nation on earth.