At Central Elementary, ties are more than a fashion statement 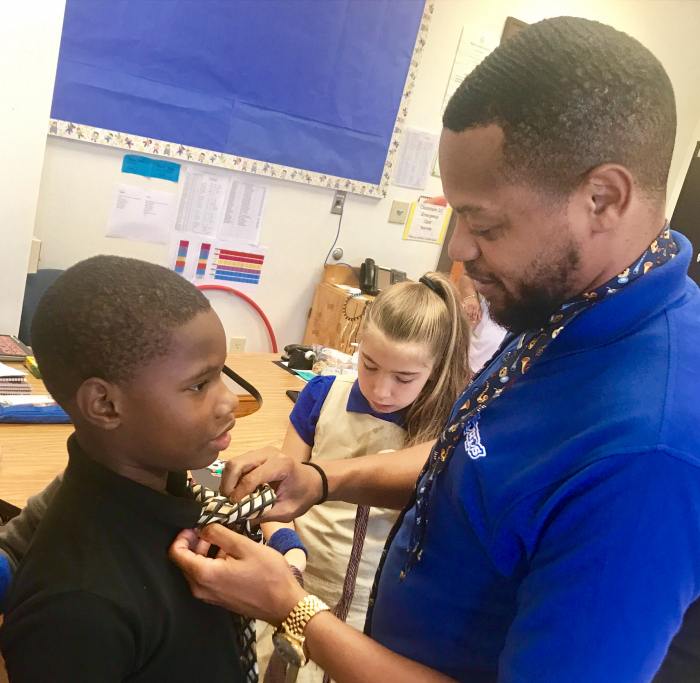 The ties that have helped bind Central Elementary School so far this year have been, well, literal ties.

Chauncey Bruton, who is in his first year as behavioral management technician, has been getting to know the students as a kind of life coach. He sees himself as a “friendly overseer” who regularly checks on students to make sure they are happy, safe and staying on track.

Even though the students have to follow proper protocol, like standing in line, “when they see me in the hallway, some of the little kids get excited…and they want to come give me a high five,” he said. “That’s a good feeling.”

The students, who often aren’t around many male teachers, have enjoyed Bruton and his colorful neckties.

What began as handing out a few ties to students has turned into a movement, with Bruton having already collected more than 100 donated ties to pass out to students. Burton said he has personally donated around 10 ties. 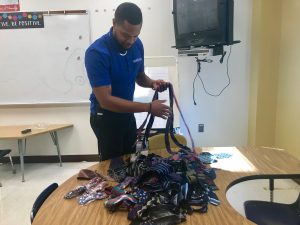 Chauncey Bruton with his donated assortment of ties he stores in his room.

A Facebook post published Aug. 28 of students and Bruton wearing ties received more than 30 comments and was shared 53 times. Similar initiatives to spur student self-esteem have happened in schools across the country.

Many in the community have been busy helping the cause.

Stanly County Senior Services has encouraged people to donate ties to the center, which will be taken to the school in a few weeks.

“I look nice in it,” 8-year-old Jai’lyn Coffman said of one of his favorite ties, an instrument-themed one with guitars, saxophones and drums.

“My whole thing is to build relationships with students,” Bruton said.

The initiative has led to a new program the school is spearheading called Tighten Up, which, through Bruton’s guidance, will help young students learn manners and how to conduct themselves in the classroom and beyond.

The plan is to have a joint program between East Albemarle and Central schools, Bruton said.

“A lot of our children, they don’t have the opportunity to see positive male role models at large, especially of a minority nature, and someone who is homegrown,” Principal Melissa Smith said.

Smith is impressed that in just a few weeks, Bruton has “just changed the culture for our young males.” She has noticed many of the students’ behaviors have changed since the introduction of the ties.

The students’ faces light up with excitement when Bruton hands them a tie or helps them fix their own.

A group of students playing football during recess immediately stood up and started fixing their ties when they saw Assistant Principal Lindsay Merritt walk by.

“I was like, ‘Wow you all look so nice today’ and they were like, ‘thank you,’ ” Merritt said.

Smith said the school plans to incorporate ties as part of the school’s dress code.

Bruton has done much more than help students adjust their ties.

“He not only teaches them how to dress, but he speaks into their lives,” Smith said. “He knows how to reach them where sometimes it’s difficult for the common voices of the mom, of the female principal, female teacher.”