Letter to the Editor: Return the Dead Man

The following letter was sent to the Mayor and all council members in Badin.

Those of us who grew up in Badin have fond memories of many icons. Places such as the piers and snack shop at the lake, softball fields where church teams played and summer socialization took place, Lowders and McClain groceries, Miss Vera’s store, the Shoe Shop. The Drug Store was a beautiful structure where we would get our medications after visiting Dr. Lapsley or just gaze at the toys on the wall while having an ice cream. The Opera House was known throughout the Southeast. At one time we even had a pool hall/grill that welcomed folks of all ages. Thanks to Alcoa, we always knew if it was 7 a.m., 3 p.m. or 11 p.m. and the sounds of the potroom lulled us to sleep every night. 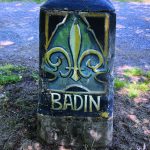 Residents spoke of their desire for the “Dead Man” post in Badin to be restored to its original location. (Contributed)

With the downsizing and eventual closing of Alcoa, most of our town has been demolished. The gas stations, ice and fuel, furniture stores, barber and beauty shops — all just a memory. And now, the country club where folks came to play golf and tennis and relax is no longer available to the public.

Yes, the Dead Man has been damaged many times through the years by vehicles, but it has persevered. It has been shoved around a bit and has been painted and repainted, but still has stood proud to welcome folks to our town.

We would like to see the Dead Man returned to its original location at the intersection of Falls Road and County Road 740. It may be big, bulky and, to some, unsightly, but it’s our Dead Man. He tells us we are home. He reminds us of simpler times. Of a town where God came first, family and friends close behind.

We are proud of Badin’s designation on the National Registry of Historical Places. While much has changed, the spirit of the town is still evident in the efforts of people willing to fight for the concrete and asphalt structure we call the Dead Man.

If the Dead Man cannot be returned to its original home, then we ask that a complete renovation be undertaken and the Dead Man be given a place of honor in the town. While this is not the solution that we want, we would like to preserve this memory.

Thank you for your attention to our concerns. Hopefully, this will be resolved soon.