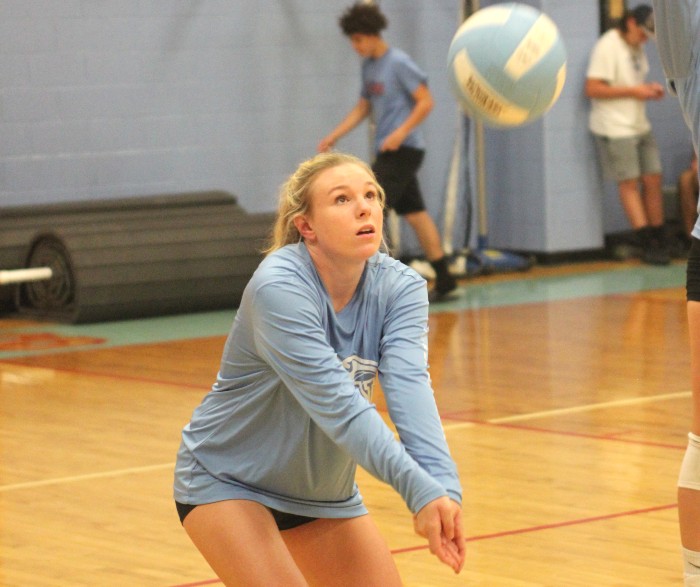 The libero position in volleyball allows for one player to focus on the defensive side of the game.

In the case of the undefeated North Stanly varsity squad, the team’s libero runs the defense with precision, receiving serves to help get her team into its offensive attack.

North senior libero Brinn Kimrey continued her efforts Tuesday night in a 3-0 conference win over North Moore with scores of 25-7, 25-15 and 25-19.

Kimrey led the Comets (8-0) with 11 digs, giving her 60 for the season at an average of 7.5 digs per match. She also has received 126 serves this season with just four errors.

Calling Kimrey one of the best liberos in the county, Morgan said her senior libero is able to survey the floor well from the back and communicate it to the front row.

“One thing I focus on is talking on every play. If you can get someone to say something every play, it keeps everyone focused and engaged in the game. That’s one thing I try to help with,” Kimrey said.

Every practice, Kimrey said she puts in extra work receiving serves and passing to the setter to make sure her technique improves.

“You have to be the best passer,” Kimrey said.

As a team, Morgan said the Comets have been able to get more players involved.

“We have a lot of different options. That’s going to be a main key in carrying us all the way. It allows my front row players to rest and closer team bonding,” Morgan said.

Kimrey agreed the team is deeper noting the efforts of other players like sophomore Madison Brower.

“We have got a lot of talented people on the bench, a lot of talent. Madison was just killing it and it helps to have fresh people to come in and hit,” Kimrey said.

The Comets, ranked ninth in the state by MaxPreps, have lofty goals to challenge for a state title. Kimrey said the team’s record and rank are in the back of their minds every day at practice.

“Sometimes it’s hard to stay serious. We like to goof off, but we have one mission and it’s states. Every practice, that’s what we talk about, how we can improve. We want to be ranked even higher,” Kimrey said.