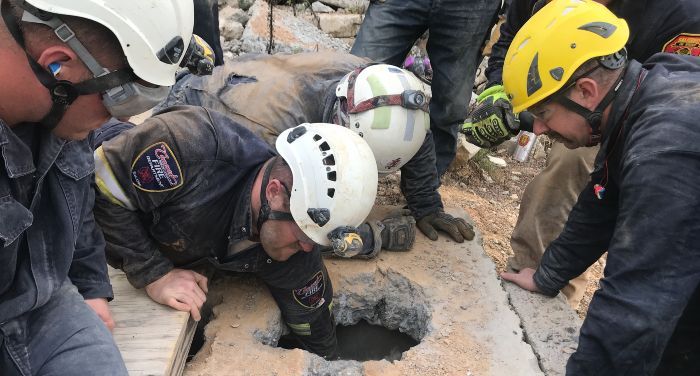 “This is my first time on a training site and it’s been a very labor-intensive class,” Concord Fire Department Capt. Jason Starr said.

Guard members from across the country have come to the training center, according to Rusty Starnes, captain of the 145th Air National Guard fire department.

During the first week, the firefighters had to brace the walls of a trench to prevent collapse and cave-ins (also called shoring) in order to locate and extricate victims. For the second week, they participated in a heavy lifting course, lifting and moving objects up to around 7,000 pounds. They also had to breach, break, cut and burn to gain access through concrete, steel and other structural components during mock rescue operations.

The training center is the only site in the country for ANG military and civilian firefighters and rescue workers to receive certification. The firefighters live and eat for free on the training base while they are taking their courses.

“Nowhere else will you be able to go on this side of our country and get this kind of quality, real hands-on experience training in scenarios like this,” Owens said.

“Our primary mission, aside from the subject matter being taught, is safety,” lead civilian instructor Scott McCaskill said.

With all of the work in trench rescue, heavy lifting and structural collapse trainings, “we keep the focus coming back to safety at all times,” he said.

The training also allowed the firefighters to come together as a team to problem solve and work through different obstacles.