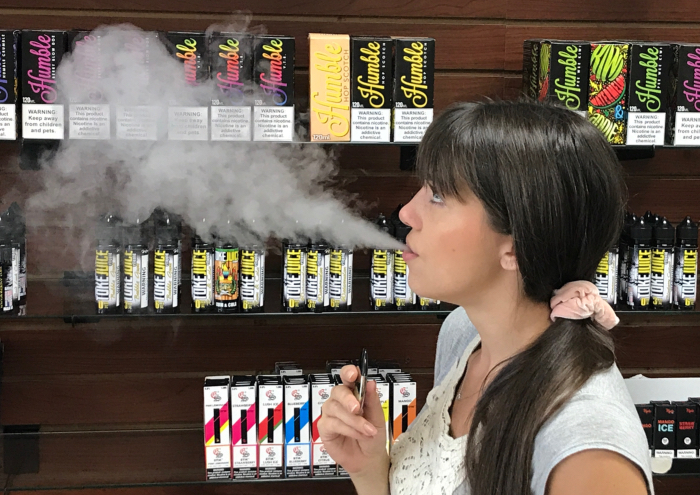 The Trump administration announced last week it would ban the sale of most flavored e-cigarettes.

The Food and Drug Administration will outline a plan within the coming weeks for removing flavored e-cigarettes and nicotine pods from the market, excluding tobacco flavors, according to the New York Times.

This comes at a time when hundreds of people around the country have suffered from vaping-related illnesses and seven people have died from a mysterious lung illness doctors believe may be caused by vaping.

E-cigarettes, or e-cigs, are battery-operated devices used to inhale an aerosol that often contains nicotine along with flavorings and other chemicals. E-cigs are popular with teenagers and are now the most commonly used form of tobacco for teens in the country.

According to the Centers for Disease Control and Prevention’s annual National Youth Tobacco Survey, e-cigarette use for high school students increased 12 percent to 21 percent from 2017 to 2018.

Among high school students, 27.5 percent reported using an e-cigarette in the previous 30 days.

Taking the flavors off the market that appeal to youth “is at least a step in the right direction,” she said.

During an Atrium Health panel Monday in Charlotte regarding e-cigs, Dr. Jaspal Singh, pulmonologist and professor of medicine at Atrium Health and Levine Cancer Institute, said many health officials were initially lulled into thinking e-cigs were safer because they didn’t have tar found in traditional tobacco products. He said additional scientific research and evidence has since debunked the claim.

“I think all of us feel that vaping, for now, we really recommend avoidance at all cost,” Singh said. 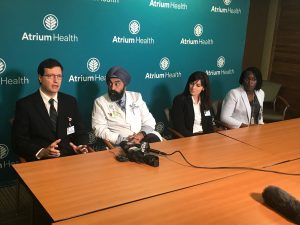 The most popular flavors, according to the youth survey, are fruit, menthol or mint and candy.

Many of the advertising for vaping devices are specifically geared toward children, especially in regard to the flavors, according to Dr. Shamieka Dixon, of the Levine Children’s Hospital Department of Adolescent Medicine and Teen Health Connection.

Though the health risks of e-cigarettes are not completely understood, the device still contain dangerous and addictive materials like nicotine, officials said.

“Many of them, especially the Juul brand, have been known to contain a lot more of concentrated nicotine than a regular cigarette does,” Growcock said. “The kids that are juuling get addicted to nicotine and nicotine has been shown to affect brain development in young people.”

Even though the medical community understands e-cigs are dangerous, many are not sure what is causing so many vaping-related respiratory injuries, and in some cases deaths.

“We’re not exactly certain what is causing this,” Dr. Michael Bueller, medical director for the North Carolina Poison Control, said.

In 2019, NCPC has handled almost 200 exposures to e-cig products. Many people, especially young children, become exposed to e-cigs when they taste or swallow the flavored fluid, get the fluid on their skin or in their eyes or breathe in the aerosol from the device.

Though Huneycutt is trying to wean herself off the device, she still has it because “it makes you look smarter at your job.”

Popular flavors at the store include anything fruit-related and menthol.

She said e-cigs help people by offering a healthier alternative to traditional cigarettes.

Huneycutt doesn’t agree with the plan to ban flavored e-cigs since traditional cigarettes and tobacco, which she said are more dangerous, are not being targeted.

Dixon said concerned parents should not ask their children if they smoke because many do not consider vaping to be smoking and don’t understand that e-cigs contain nicotine.

“So you have to be specific about what you’re talking about,” she said.