Millingport makes academic leap, goes from a ‘D’ to ‘B’ school 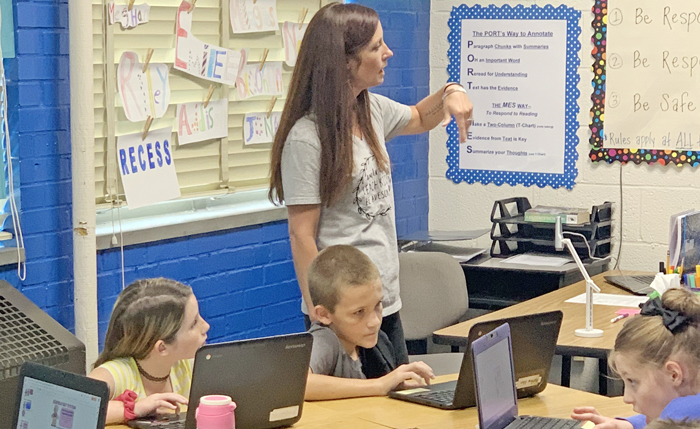 While 17 of Stanly County’s 20 public schools either met or exceeded growth during last school year, one school in particular hit an academic home run.

In the course of one year, Millingport Elementary improved from a “D” to a “B” school. It also went from not meeting school growth to exceeding growth.

The scores came from the North Carolina Department of Public Instruction.

The improvement exceeded even the wildest dreams for principal Megan DePasquale.

“I was confident that we were going to come up a grade level, but I was utterly shocked that we went up two,” she said.

When she first received the scores from Director of Testing and Accountability Timothy Hatley, she did not think she reading her email right. DePasquale had to ask curriculum coach Bobbie Thorneburg to examine the scores to make sure what she was seeing was correct.

“I am extremely proud of all our schools,” Superintendent Dr. Jeff James said. “Millingport was one of 10 schools with over 100 percent growth in their composite score. Stanly County Schools had 96 percent of its schools with a ‘C’ or higher.”

Though many schools regularly improve their student performance grades each year, it is rare for a school to improve as dramatically as Millingport, officials said.

“To my knowledge, Stanly County Schools has never had a school jump from a ‘D’ to a ‘B’ (or two other places) in one year,” Hatley said. “I would assume that is a rather exceptional achievement.” 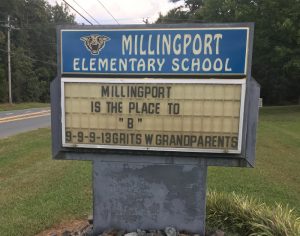 Millingport Elementary School improved from a “D” school to a “B” school in one year.

Millingport plans to have a school-wide celebration in October.

DePasquale, who left her job as South Stanly High School assistant principal in October, credited a community-wide effort for the recent academic success.

“It took everybody — from my staff, our parents, our PTO, me coming in, the county office, Dr. James’ support,” she said.

When DePasquale first arrived at the school, she met with each staff member one-on-one to ask them what they wanted to see happen at Millingport and what strategies or ideas they had to help improve the school.

“With us being small”—the school currently has 208 students— “it truly takes us all,” she said.

One of DePasquale’s main goals when she came to Millingport was making sure the school improved its “D” grade.

A key way to achieve the goal was to review student data to see where students could improve.

She and the staff reviewed data from the previous year and data from assessments taken during the year — end-of-grade tests, NC Check-Ins and iReady assessments — to identify the weaker subject areas that students needed to improve upon.

Students took NC Check-ins and iReady assessments three times during the year and the school received the data a few weeks later, making it easier to address areas the students struggled with.

“We’re constantly sharing data and we want our teachers to look at their student data,” DePasquale said.

Thorneburg, who is in her third year as curriculum coach, said there was a greater emphasis on data in 2018-2019 than the previous year.

The data the teachers and staff received was comprehensive: teachers were able to see which specific questions students missed along with which standards they needed more help with.

Reviewing the data allowed the school to “address issues at the moment instead of waiting at the end,” Thorneburg said.

Every Monday through Thursday for 40 minutes, students struggling in certain areas would gather with teachers in small intervention groups to try and improve.

Teachers in grades K-2 and those in 3-5 would meet every other Monday to discuss and provide updates on the students involved in the small intervention groups.

While the iReady and NC Check-in assessments did not count as grades, the teachers showed each student their score and worked with them to create goals to try and meet before the next assessment.

“Kids need to take ownership of their education,” Thorneburg said. “And they need to know where they are and what they’re doing.”

And sometimes, after reviewing the data, teachers learned they could have done a better job teaching a certain area to their students.

“Everything we did we kind of drove it by that data,” Thorneburg said.

The teachers and staff also focused on getting to know each student beyond his or her academic performance.

Though the data drove daily instruction, the school’s relationships with the students drove how they operated overall.

The teachers gave DePasquale a roster of their students and she, along with Thorneburg and others, examined the “whole child” — factors that extended beyond data, including a student’s personality, their home life and how they feel when they arrive to school in the morning.

“You got to know that whole child,” Thorneburg said. “Not just part of him but everything about him…. Sometimes it takes years to figure that out but eventually we get there and it makes you understand.”

This holistic approach to learning about each student at Millingport has enabled the school to better reach out and connect with students.

And connecting with the students can be as simple as having teachers around to smile and greet them in the hallway or ask them how their day is going, Thorneburg said.

“You learned a lot just by how their demeanor was coming into the classroom,” Thorneburg said.

Last year during a teacher workday, DePasquale and several teachers boarded a bus and traveled to many of the student’s homes to learn more about where they come from.

Thorneburg said the motto for last school year was simple: “We will reach every child with whatever it takes.”