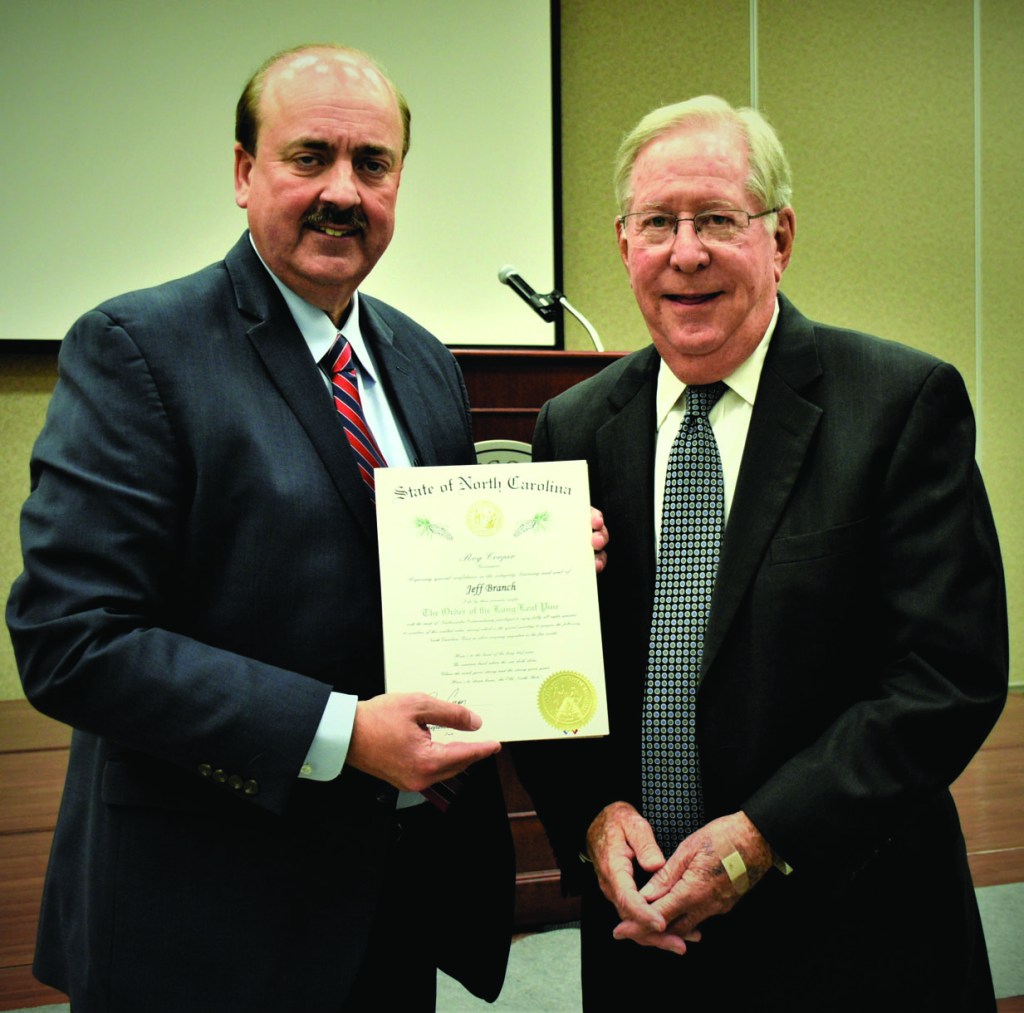 Jeff Branch accepts the Order of the Long Leaf Pine award from attorney Charles Brown at his retirement celebration. (Contributed)

When tallied up, the number of students Sgt. Jeff Branch taught in his 27 years as a D.A.R.E. officer is staggering.

At a retirement ceremony Sept. 12, the Oakboro resident was presented the Order of the Long Leaf Pine award. It is the highest civilian honor that can be given to a North Carolina resident.

When he began instructing D.A.R.E. in 1992, the message was to stay away from tobacco, alcohol and marijuana. Then the curriculum changed to more about the decision making process.

“This involved problem solving, making decisions and asking yourself, did I make the right decision?” Branch said. “Now it’s more on vaping and the opioid epidemic.”

He estimates he has listened to more than 12,000 essays and attended 150 D.A.R.E. graduations.

“He poured his heart into it every day,” Tim Capel said.

Capel was Branch’s supervisor when he switched to Montgomery County.

“He absolutely loved the kids and cared about them and wanted to prepare them for life and what was ahead,” Capel said.

Capel spent 18 years partnered with Branch, up until his own retirement three years ago. The pair still talk or text about every day.

“I told him he’s my little brother,” Capel said. “He’s just down to earth. He’s just a super good guy. What you see with Jeff is what you get.”

But it’s not just at the local level where Branch has had an impact. He has been involved with the North Carolina D.A.R.E. Officers Association for several years and has served in just about every leadership capacity. He was the longest serving D.A.R.E. officer in Montgomery and one of the longest serving in the state.

“I will miss teaching,” Branch said. “I truly loved that part of this program, along with the rapport you make with the students. I have had parents that I taught where I recently began teaching their kids.”

He plans to stay involved with D.A.R.E. in a guidance role for Montgomery County and as a coordinator for the state conference. He also said he will continue teaching in service training for law enforcement and continue working part-time for Hartsell Funeral Home, where he has been noticed for the last 25 years.

And he will continue to play perhaps his biggest role he is known for — that of a Mayberry Tribute Artist for “Howard Sprague” from “The Andy Griffith Show.”