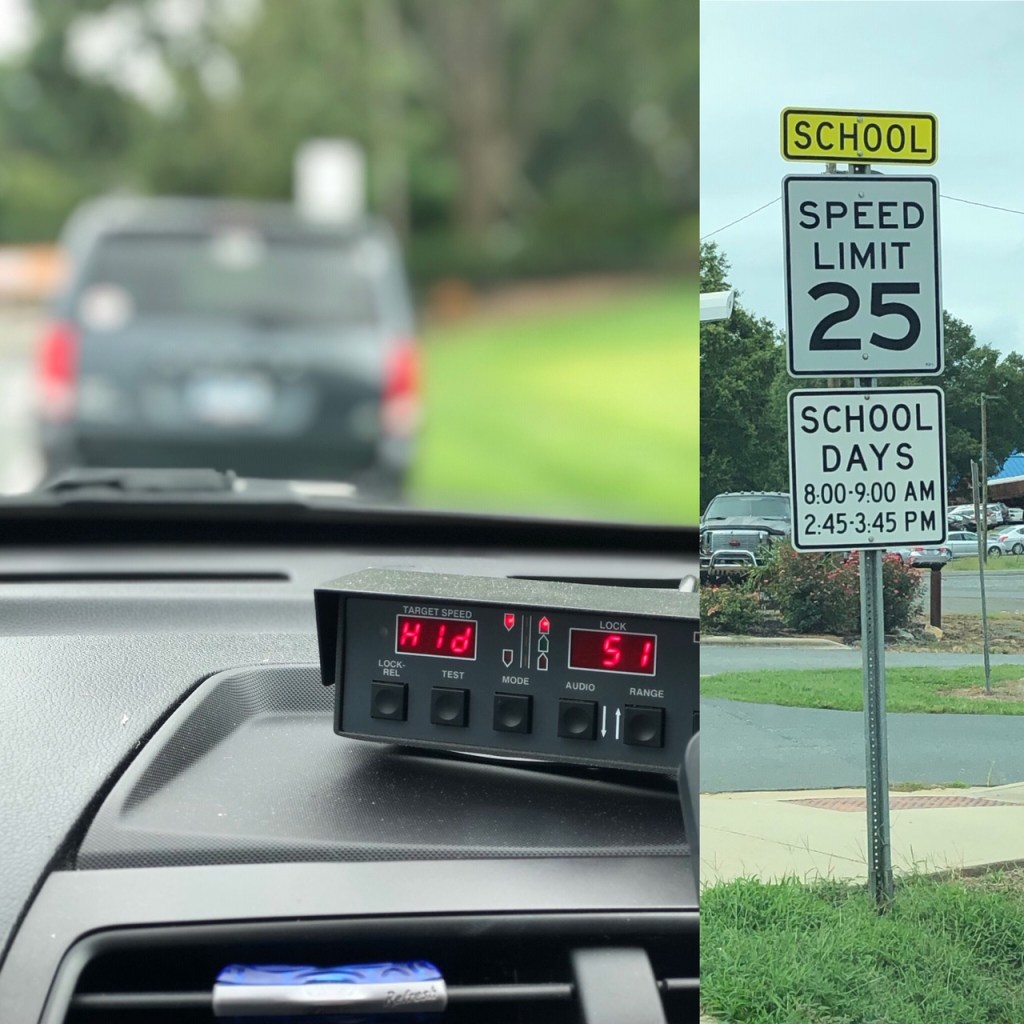 Oakboro has had a sharp increase in speeding violations this year, police officers said.

The Oakboro Police Department is asking motorists to slow down following a large increase in the amount of speeding citations its issued during the summer.

Sgt. Jason Eschert said one motorist was allegedly driving 70 mph in a 20 mph zone at 3:09 p.m. Sept. 1. The motorist was charged with speeding and reckless driving.

Too often, Eschert and other officers see motorists driving at about 50 mph downtown, he said.

“We had a lady [recently] near the school who came flying up behind a car doing 35, then flew past it on a double yellow line,” Eschert said. “I pulled out to stop her because I clocked her on the radar, and her excuse was, ‘I was just in a hurry to get to the beach.’ ”

The woman was allegedly driving 54 mph in the 35 mph zone.

“As far as I know, the sand’s still going to be there at the ocean when you get there,” Eschert said. “Why risk hurting someone because you’re in a hurry to get there?”

In the last three months, Eschert estimated Oakboro police have written about 550 speeding tickets. In the same time frame last year, the number was probably closer to 250, he said.

“The thing that’s interesting about it is the majority of those cited for tickets, I’d probably say about 90 percent, don’t even live in or near Oakboro,” Eschert said. “A lot of it is cut-through traffic going to the beach, so a lot of it is Cabarrus County and Mecklenburg County.”

In many cases, officers are busy writing tickets for those going at least 15 miles above the speed limit, meaning there are more who are speeding but not as fast.

“I wish I could put my finger on it,” Eschert said. “I just think that in general, our society has become a fast society. Everybody is in a hurry to get to destinations, and the reality is, we’re putting our own safety and the safety of others in jeopardy every time we increase that speed, the posted speed limit.”

The problem goes beyond the downtown’s core.

“We’ve had a lot of complaints about speeding, not just on Main Street but on Aquadale Road and St. Martin,” Eschert said. “We’ve tried to shift focus at different times of the day. A lot of the time it doesn’t matter what time it is, there’s going to be someone speeding. And our goal isn’t to write speeding tickets, our goal is to get people to follow the posted speed limit and keep our town safe for everyone that lives there.”

The myth that officers write tickets to meet a quota is still going strong, but is untrue, the sergeant said.

“I’ve been in law enforcement for 11 years,” he said. “There is no quota. There has never been a quota. People are under the misconception that the town gets all this money for writing tickets. That’s not true. The majority of the money goes to the court system.”

Oakboro does participate in campaigns from the Governor’s Highway Safety Program, which does sometimes include an emphasis on speeding, as well as DWIs and seatbelt violations.

Roadwork in and near Oakboro has caused confusion and diverted more traffic through town, and the extra traffic has only compounded the speeding issue, Eschert said.

About half of the drivers Eschert pulls over say they missed the signage while the other half say they saw it.

Eschert isn’t sure what caused the increase in speeding violations this year, but he hopes to write fewer tickets with the beach season coming to an end and school back in session. With the extra signage, highlights and radar trailer, the department isn’t sure what else to try.

“We really don’t know what more we can do to get people to pay attention,” he said.

While Oakboro doesn’t experience many fatal accidents, they do happen.

“In my 11 years, I have seen my share of speeding-related traffic crashes and fatalities from those,” Eschert said. “The hardest part is telling someone they have lost a loved one because of another’s actions related to speed.”