A Stanly County native helped bring Agrabah to North Carolina this month with the musical hit, “Aladdin” at the Blumenthal Performing Arts Center.

Cassidy Stoner joined the cast of “Aladdin” about a year and a half ago. The show is in a new city every three to four weeks. This week, it will wrap up its time in Charlotte. 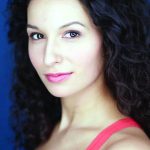 Cassidy Stoner wraps up her Charlotte stint with “Aladdin” this week.

Rather than playing one role, Stoner is a swing, covering for eight women in the show whenever one is unable to perform. Whether it is performing as Princess Jasmine or in an ensemble role, Stoner has to be prepared to go on stage with a moment’s notice.

Stoner grew up practicing at Albemarle Academy of Dance with Leigh Roush. Leigh’s husband, Edmund, was Stoner’s first voice and acting instructor. Stoner was also part of the Talent Company.

Upon graduating from Gray Stone Day School, Stoner attended Pace University in Manhattan, earning a bachelor of fine arts in musical theater in 2016. After finding an agent and manager, Stoner managed to join multiple shows, but the jobs only lasted for about a month each. It was in April 2018, just two short years after graduating, that Stoner was hired for “Aladdin.”

The show is unique since the cast spends a few weeks in each city rather than a couple of days like many other shows. The slower pace is a large reason Stoner has stayed with the show for so long, though she has enjoyed the traveling the job brings.

“It definitely has been hard,” she said. “Overall it’s very fulfilling. I got to see parts of the country I never thought I’d see before.”

While performing at the Blumenthal, Stoner has stayed in Albemarle.

“I have really enjoyed getting to spend the time with my family,” she said. “As I get older, I recognize with the type of work I do, I won’t be able to have the luxury of getting home often.”

Stoner said even though her hometown is somewhat different than it was before she left for college, some things haven’t changed.

“I still can’t go anywhere without running into 10 people who have known me since I was 5,” she said.

While performing at the Blumenthal, Stoner said several former teachers, friends from the Talent Company, her father’s doctor and the Roushes have all attended the show.

“It’s been funny to see who all is coming out of the woodwork to come see me and that’s been special,” Stoner said.

“It meant a lot for (Leigh Roush) to be at the show because at the end of the day she’s always going to tell me straight if I need to get back into class and get back into technique,” Stoner said. “On tour, it’s hard to keep up with everything technique-wise. It was great to see her and she had wonderful things to say about the show.”

Stoner’s part in the show changes daily. Some days she may not be in a performance while other times she may play in the ensemble or lead. She takes turns with another swing.

“In our business, they say if you can find a good swing you need to hang onto them because it’s hard to find,” she said.

Being a swing requires “multitasking, patience, and a different way of thinking,” Stoner said.

She has to keep up with the entire performance of all eight women’s roles.

“I have an entire composition for eight people with notes,” Stoner said.

She has to know when each person enters and leaves the stage, when and where they have quick changes, and who they follow onto the stage, as well as memorizing lines and choreography.

“I think that Jasmine’s role is the easiest of the roles that I cover,” Stoner said, adding that there are a couple of 30-minute long breaks for that role.

“Some of the girls I cover just run the entire show and my feet are aching at the end,” she said.
Stoner enjoys playing Jasmine as well as one of the princess’ three attendants. (They are in place of Rajah the tiger from the animated movie, Stoner said.)

“I really like playing any three of those girls,” Stoner said. “They are really funny, have cute little bit lines, and have gorgeous purple dresses.”

She enjoys the dancing in the show, as well.

Stoner is glad her family and friends have had the chance to see her in “Aladdin.”

“They’re all very, very proud of me,” she said. “I went on as Jasmine last weekend. They all got to see me play a principal track in the theater that I grew up dreaming of doing. It was special for me and them. They love bragging about me and they’re proud. It’s cute and sweet. It makes me happy to make them proud. The life I’ve chosen to lead is not popular and is difficult. The fact that I’ve had even a little success means the world to me.”

Stoner has no plans to leave “Aladdin” soon and has a permanent role with the cast.

“When it comes to a year and a half, it’s a long time to be with an acting job,” Stoner said. “Most don’t last as long. There’s not a whole lot, when it comes to acting jobs out there. This is the pinnacle. It’s obviously hard being away from New York.”

Stoner has been in a variety of shows including “Gypsy.” One of her favorite performances was in

“The Pajama Game” in college. She played in the ensemble and was able to create the character. While the crew had outfits planned for her, they completely changed the costumes to suit the personality Stoner had formed for her character.

“It’s a really silly show, and I love being silly,” Stoner said. “All of us in the ensemble were cutting up and having a blast the entire time.”

Stoner plans to take some of her friends from “Aladdin” to visit Carowinds while the show is in Charlotte.

She has memories of visiting every summer with her father.

“Aladdin” will be at the Blumenthal through Sunday.

“Regardless of whether I’m in the show, everyone should come and see it because it is a blast,” Stoner said.