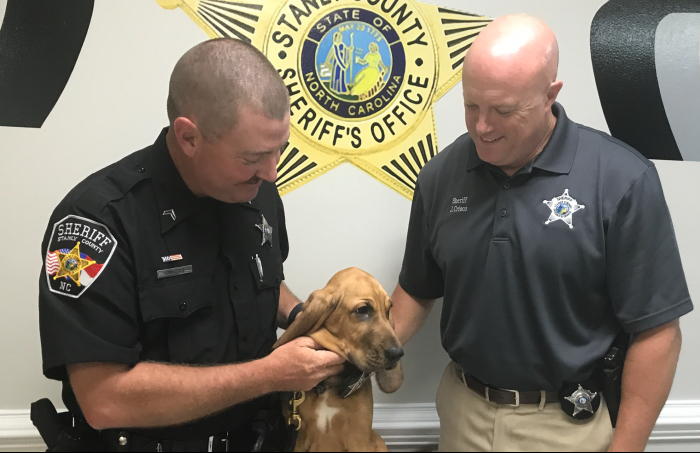 Cpl. Justin Shaffer and Sheriff Jeff Crisco with bloodhound Gunner, who will be a member of the Sheriff's Office, and Shaffer's partner, once he goes through training.

The Stanly County Sheriff’s Office will soon gain a new officer — albeit a furry, four-legged one.

The office recently acquired a bloodhound they named Gunner from a couple in Norwood. The dog was donated to the Sheriff’s Office.

Unlike other dogs in the K-9 division, who serve many different roles, Gunner, who is 17 weeks old, will be a single-purpose dog. His role will be centered around search and rescue.

His purpose will “be to track individuals, whether it be a suspect that jumped and ran from a vehicle…or a missing child that wandered off…or an elderly person that has a mind-altering disability that wonders off and get lost,” Cpl. Justin Shaffer, Gunner’s future partner, said.

During a search and rescue mission, “I’m following him,” Shaffer said. “He’s leading the whole effort.”

Because bloodhounds are famous for their ability to discern human scent, Gunner is a “true subject matter expert,” when it comes to tracking, Crisco said, something the Sheriff’s Office hasn’t had for around 10 years since its last bloodhound, Lucky.

Shaffer and Lt. Billy Smith talked about acquiring a tracking K-9 back in the spring.

“They approached me about it,” Crisco said. “They had already done all the homework. They just brought it to me and I’m like, ‘yes, of course.’ ”

Gunner lives with Shaffer in Albemarle and is in obedience training. Once that ends, he will attend handler’s course training, where he will be introduced to his job duties.

Shaffer said Gunner should be ready to officially join the force in about a year. With the addition of Gunner, the Sheriff’s Office will have four dogs in the K-9 division.

Gunner is Shaffer’s second K-9. He previously worked with Doom, a Belgian Malinois, who, due to medical conditions, retired at the end of 2017. Doom still lives with Shaffer.

When asked if Doom and Gunner get along, Shaffer said “we’re still working on that.”

But Gunner does get along with Shaffer’s family, including his teenage son Adam.

“They love him,” Shaffer said. “He’s a member of the family already.”

Shaffer is happy knowing that “in the future, I’ll have a canine partner in the vehicle with me again,” he said. “I miss it.”

While Doom was an apprehension or bite dog, Gunner is more people-friendly.

Though Gunner is only about 32 pounds, Shaffer said he expects the dog to grow to around 150 pounds.

To Shaffer’s knowledge, no other neighboring county has a bloodhound, so the Sheriff’s Office plans to let other counties borrow Gunner should the need for his tracking services ever come up.

As of right now though, Gunner is enjoying just being a dog.