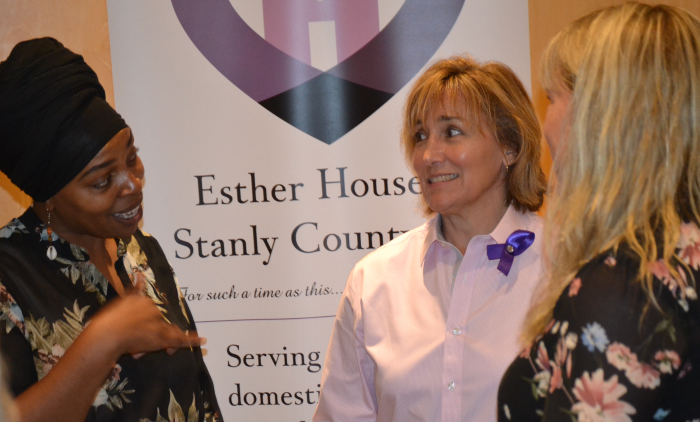 A woman who was at the top of the world was brought down by heartbreak. But now she is back, throwing punches harder than ever.

She said though she has a lot of titles — daughter, sister, college graduate, teacher, boxing champion and promoter — the title she is most proud of is that she’s a “domestic violence survivor.”

The daughter of a West Virginia coal miner, Martin became the biggest draw in female boxing in the 1990s, fighting in legendary boxing arenas such as Madison Square Garden and Caesar’s Palace. She also appeared on the cover of Sport’s Illustrated and signed a contract with boxing promoter Don King.

In 1992, she married her boxing coach, Jim Martin, who wanted to make her the best female fighter in the world so he could make lots of money, she said.

During their time together, she referred to Jim as the puppet master, much to his liking, saying: “My mouth moved and his words came out.”

But she said he had motives. Even before she married him, she said, he told her if she ever left him he would kill her.

She initially laughed when he first told her, but as time passed and as he told more people, Martin came to learn it wasn’t a threat or a joke, “it was a promise.”

As her boxing career caught fire and she was being interviewed by people like Jay Leno and Katie Couric, her husband was still behind the scenes dictating every aspect of her life.

Jim started to follow her wherever she went, going as far as coming to the nail salon and offering to paint her nails.

“He wanted to have control of everything that I did,” Martin said.

As Martin’s boxing career was winding down and miserable in her marriage, she became a cocaine addict for several years before deciding to make a change in her life.

In 2010, Martin made the decision to leave Jim. But a few days later, she came back home and encountered her husband.

Jim stabbed her four times, cutting her calf muscle and puncturing her lung. As she was on the floor in a pool of blood, he pulled out a gun and shot her in the chest, missing her heart by three inches.

She immediately got up once she heard the shower water turn on, grabbed car keys and went outside to try and escape.  Once she realized she had the wrong keys, she went into the middle of the road and flagged down someone who took her to the hospital.

Jim was arrested a few days after the attack. In 2012, he was found guilty of attempted second-degree murder. He was sentenced to 25 years in prison.

Martin was in recovery for a week and actually got back into the ring within six months. As she was fighting for her 50th win, a doctor stopped the match, thinking she had broken her hand. She was taken to the hospital. After surgery, she suffered a stroke.

“I know God won’t put more on you than you can handle,” she said, “but God thinks I’m a strong woman…because he keeps putting stuff on me.”

She is now the CEO of Christy Martin Promotions, a boxing promotion company that has promoted many events in North Carolina.

“Be more aware of everybody around you,” Martin said as she concluded her talk.

From July of last year to June of this year, Esther House sheltered 107 women and 52 children. It provided services to 48 women and 36 children, Executive Director Donna Miller said.

But people have to be cognizant of those around them, especially the ones who might be struggling, she said.

“People will not take your hand until they see your heart,” Miller said.