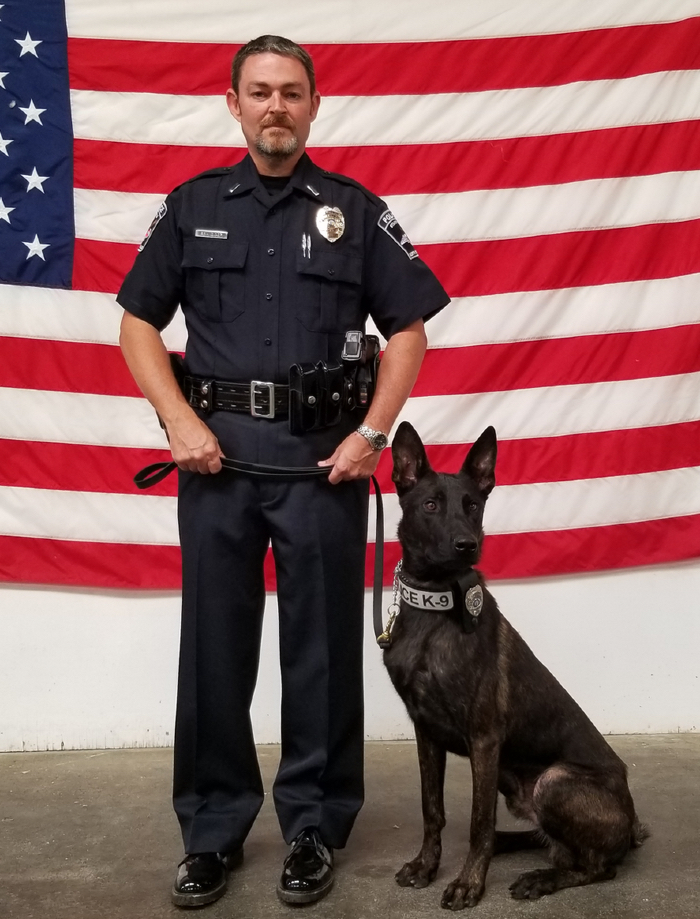 For the first time in more than a decade, Stanfield Police Department has acquired a K-9 officer.

Tango, a one-and-a-half-year-old black Dutch shepard, arrived in the town a few weeks ago from Ventosa Kennel, a police K-9 training facility, in Scotland Neck, just north of Rocky Mount. His first day on the job was Sept. 23.

He weighs 70 pounds but will likely grow to between 80 and 90 pounds.

Schneider, who has worked in Stanfield since 2004, approached Chief Corie Faggart about getting a dog last year due to the growing drug problem in the town. Though the town has had a few K-9 officers in the past, it has not had one during Schneider’s tenure.

Schneider and Faggart traveled to Ventosa Kennel in April. They said Tango immediately stood out. While the other dogs were running around in circles and barking in their kennels, he was calm and relaxed, which matched Schneider’s own temperament.

“Anytime you’re going to match up an officer with a dog, you want them to mesh well together,” Faggart said.

Due to the relatively low numbers of calls the police department receives compared to other local agencies, Faggart said it was nice not to have a super high-energy dog.

They visited Tango multiple times before purchasing him in August.

Schneider and Tango went through a six-week patrol/narcotics canine handler’s course, where the dog spent time getting to know his partner and getting introduced to his job duties. Schneider trained with police officers from around the country.

“I knew it was going to be hard work going in, but you just don’t realize how hard it’s going to be,” he said about the training.

Tango, along with the other dogs at the training, will receive body armor vests from the Mona Pants Foundation, a nonprofit that raises money for dog-rescue groups. The foundation launched a vestification project in 2016 to help better protect K-9 officers.

The purchase of Tango, including his training, cost $13,000.

When off-duty, Tango enjoys playing with his toys and interacting with Schneider and his family.

It’s important that Tango has his own quality time to enjoy being a dog when he’s not on duty, Schneider said.

Faggart is still getting to know his new officer, but likes Tango’s friendly demeanor and has been impressed with his professionalism.

“I’ve noticed when it’s time for him to work…he can change gears really quick and go into business mode,” Faggart said.

Schneider is slowly introducing him to people because he wants to make sure his partner is as comfortable as possible in his new setting.

Schneider’s mindset has had to change now that he has a partner.

Though Tango’s jurisdiction is Stanfield he will be used in Oakboro or Locust if Schneider’s on duty and there is a traffic stop requiring his assistance.

Tango is the only police dog in the western part of the county. While Albemarle and Norwood both have a K-9, the Sheriff’s Office has four.

As long as Tango stays healthy, Schneider hopes he can work on the force seven to eight years, about the average span for K-9 officers.