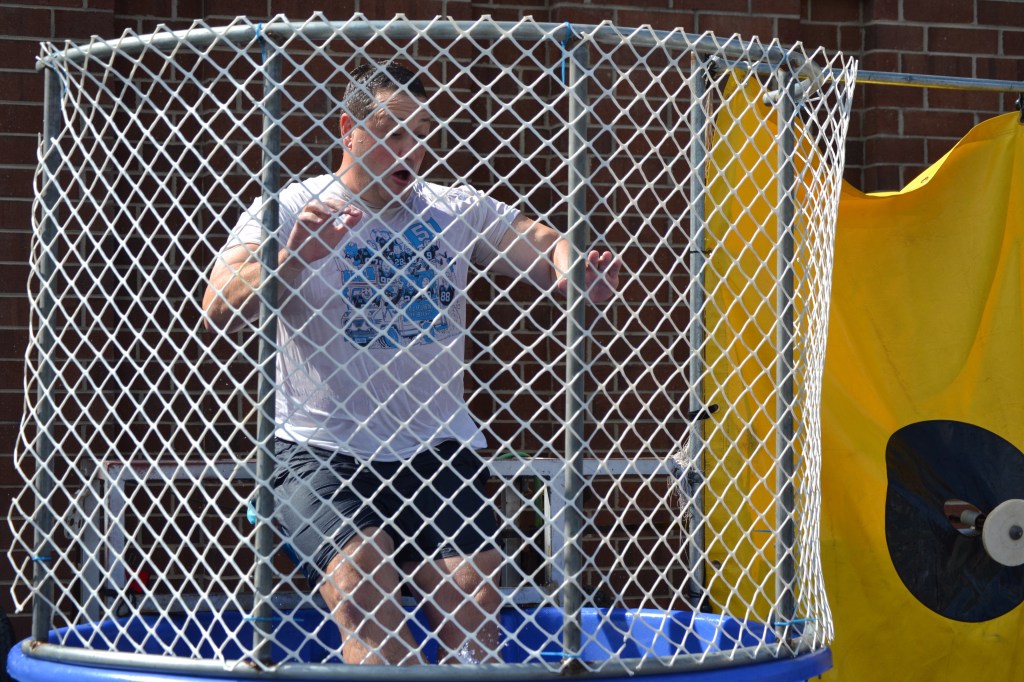 Andy Lucas falls into the water after a lucky participant hit the bullseye.

Two county leaders were hanging on by the seat of their pants, until the bottom fell out.

Sheriff Jeff Crisco and County Manager Andy Lucas came up all wet for a good cause as participants in a United Way fundraiser Friday afternoon.

The event, where Crisco and Lucas took turns in a dunk tank, helped raise money for United Way of Stanly County and was part of a series of “Friday Fun Fairs” for county employees each Friday afternoon in October. The next Friday Fun Fair will be at the courthouse.

“We have 16 partner programs in Stanly County that need our help to provide basic needs such as food, emergency shelter and housing assistance, as well as ones that provide childcare and educational programs for kids, independent living support for seniors and counseling and healthcare for people without insurance,” Executive Director Salem Taylor said.

Some of its partner programs include Esther House, Crisis Assistance Fund, Habitat for Humanity, Boys Scouts and Girl Scouts, Homes for Hope and Stanly County 4-H.

The Friday Fun Fairs are one way of raising money during United Way’s annual campaign, which kicked off a few weeks ago and runs into January.

The Friday event gave county employees an opportunity to raise money for United Way, socialize with each other and have fun, Lucas said.

Several people lined up to pay $1 to take three shots at knocking Crisco and Lucas into the water.

“I’m hoping I’ll get dunked multiple times,” Lucas said with a laugh before he entered the tank. “The more times I get dunked, the more money we’re raising.”

For more information about United Way of Stanly County or to help donate, visit www.unitedwaystanly.org.