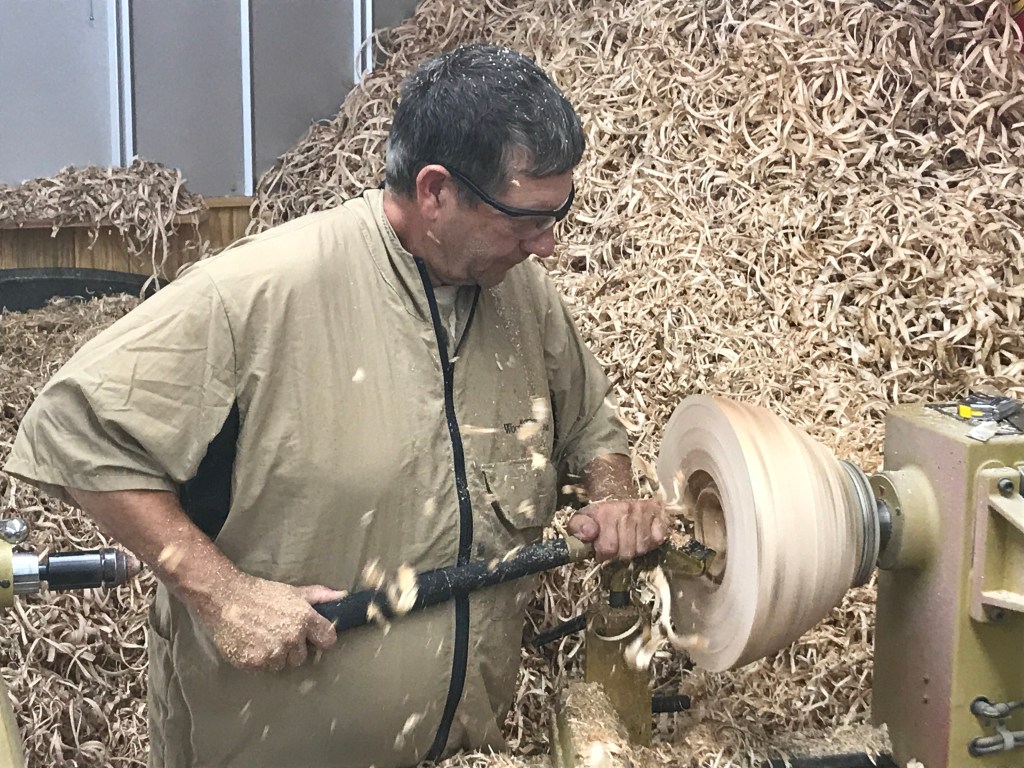 Sometimes life is full of irony.

Jerry Measimer of Richfield took a shop class in eighth grade, where he learned to turn wood into pieces of art — in this case a lamp and a baseball bat. But he didn’t take to the craft and found it boring.

“I said this is stupid,” he said. “I didn’t like it because I didn’t understand it.”

Fast forward to 2007 when Measimer picked up a wood-turning book featuring hollow, ornamental Christmas balls on the cover. The balls each had a tiny hole 16th of an inch thick.

Measimer was in disbelief with the intricacy of the ornaments — and it piqued his interest.

“There’s no way anybody could do that,” he said. “It was just a beautiful, clean piece of wood.”

He ended up meeting the man who made the ornaments, took a class from him and fell in love with wood-turning.

“It just snowballed,” he said. “That got me hooked.”

Though the former Marine has a full-time job working for Culp Lumber Company, he spends time each day in a workshop behind his house turning big chunks of wood on a lathe into intricate — and oftentimes colorful — bowls, urns, frames, hummingbird houses and cowboy hats. The workshop is filled with mounds of wood shavings.

Two of his hummingbird houses were featured in a recent Our State magazine. 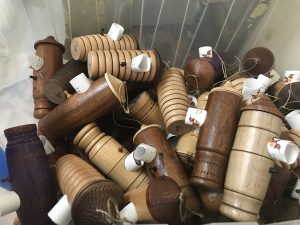 He has made thousands of pieces since he started wood-turning over a decade ago.

Measimer attended a Raleigh wood-turning symposium, the American Association of Wood-turners, in the summer where he taught classes and networked with many of his fellow wood-turning friends.

He had one of his wooden cowboy hats recognized by three judges. Out of around 700 pieces at the symposium, the judges recognized only around 10 pieces, Measimer said.

“I was just shocked,” he said when he found out one of his pieces was recognized.

He has taught at numerous workshops, even a class at Pfeiffer, and has given many demonstrations. His pieces have been on display at the Stanly Arts Guild, the Cabarrus Arts Council and the Mint Museum in Charlotte. He donates many of his pieces to local organizations and charities.

Measimer is also a lifetime member of a wood-turning club in Concord.

But for many, Measimer is synonymous with his cowboy hats. He’s made them for many people — including a former Miss America and musician Charlie Daniels.

It takes him about a week to make each hat. The wood has to be bent and dried. Once finished, Measimer applies coats of lacquer and hand-rubs each hat with sandpaper. The hats are also quite light — usually between 7 to 9 ounces.

He thinks he has made more than 500 hats. 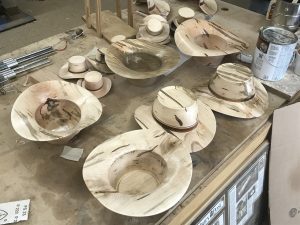 Wooden cowboy hats are a specialty of Measimer.

But wood-turning is not easy.

Besides being delicate — Measimer said one little slip-up, even if he is breathing too hard, can ruin the piece — wood-turning can be dangerous.

Measimer has broken numerous fingers, his nose, cheeks and toe while wood-turning.

Wood-turning is an art that took time for Measimer to enjoy.

In the early days when he was still learning the craft, he said he threw a hat in frustration after a mistake. He sat down and asked himself: “Am I doing this for fun or what?”

It was during this moment that his thinking changed.

“That’s when I told myself I didn’t care what I made,” he said. “I just liked the process of wood-turning.”

Wood-turning is calming and relaxing to Measimer. He likes to turn the wood on the lathe while listening to the Blues or watching television.

“I love to just see the shavings fly,” he said. “I could do that all day and make nothing.”

Now, if he ever breaks a piece, he simply picks up new wood and begins the process again.

“There is always more wood,” he said.