Lenoir-Rhyne University added five members to its Sports Hall of Fame on Saturday. 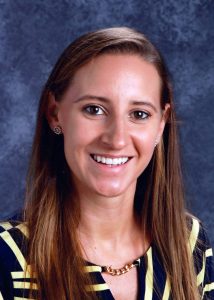 One of the members of the Class of 2019 is Lauren McClelland Mauldin, a New London resident.

The Hall of Fame induction ceremony was part of Lenoir-Rhyne’s Homecoming Weekend and took place in the P.E. Monroe Auditorium on the L-R campus Saturday.

Mauldin played for the Bears from 2004-07 and currently teaches at Mount Pleasant.

Mauldin stands as the best setter in Lenoir-Rhyne volleyball history with 5,558 career assists, 1,777 more than anyone who has donned an L-R uniform.

She was the starting setter for the 2004 conference championship team, the first SAC Championship in program history. In total, Mauldin led the Bears to a pair of SAC titles and was named the league’s Freshman of the Year in 2004 and Second Team All-Conference in 2006.

Being inducted into the Hall of Fame is not something I ever even imagined. It is such an honor and I am completely humbled by this experience,” Mauldin said.

She added her induction was a testament to her teammates as well.

Mauldin also thanked her high school and club coaches for their efforts.

She is still involved with collegiate volleyball as an official.