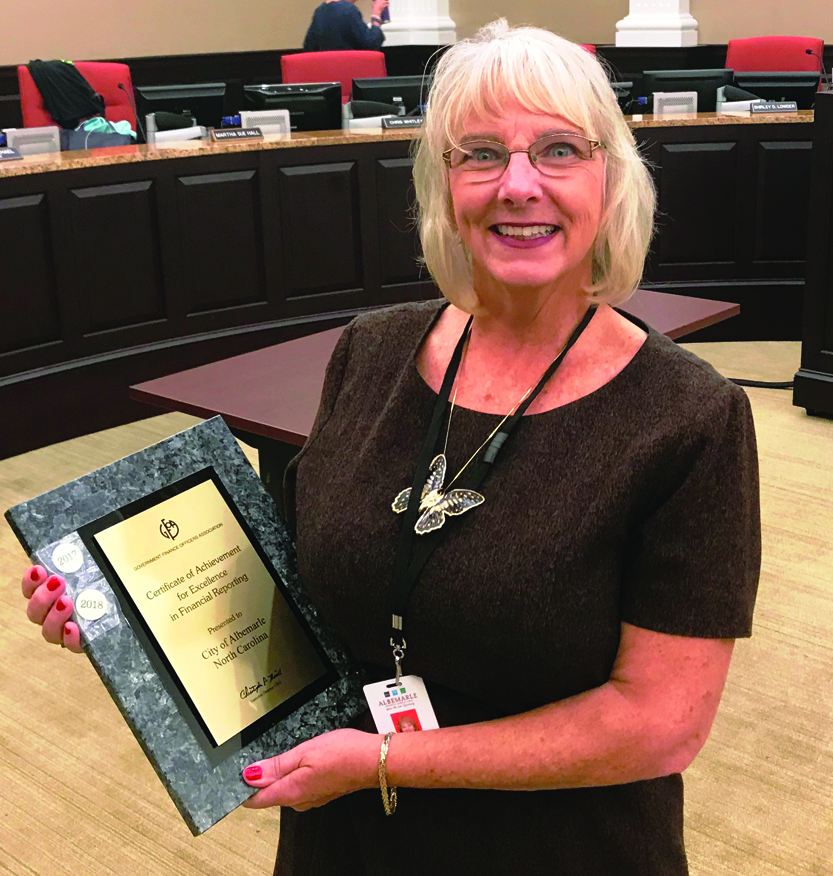 Albemarle Finance Department Director Colleen Conroy displays a Certificate of Achievement for Excellence in Financial Reporting Award from the Government Finance Officers Association of the United States and Canada. She made the announcement of receipt of the award at Monday's council meeting. (Photo by TOBY THORPE)

Albemarle Finance Department has received the Certificate of Achievement for Excellence in Financial Reporting Award from the Government Finance Officers Association of the United States and Canada.

Finance Director Colleen announced the award before the City Council Monday night.
This is the second consecutive year the City of Albemarle Finance Department has earned this recognition.

According to GFOA, the award is “the highest form of recognition in the area of governmental accounting, and its attainment represents a significant accomplishment by a government and its management,” and is based on the city’s comprehensive annual financial report.

“(The city’s report) has been judged by an impartial panel to meet the high standards of the program, which includes demonstrating a constructive ‘spirit of full disclosure’ to clearly communicate its financial story,” GFOA’s Mark Levine said in a news release.

Conroy added: “I was over the moon when I found out we received this award. This was quite an accomplishment, because there are very strict criteria that we have to meet. Plus, this is an international award.”

The GFOA is a major professional association servicing the needs of more than 20,000 appointed and elected local, state and provincial-level government officials and other finance practitioners.

It provides publications, training programs, services and products designed to enhance the skills and performance of those responsible for government finance policy and management.

The association is headquartered in Chicago, with offices in Washington, D.C.