Baby calf fights through adversity thanks to wheelchair 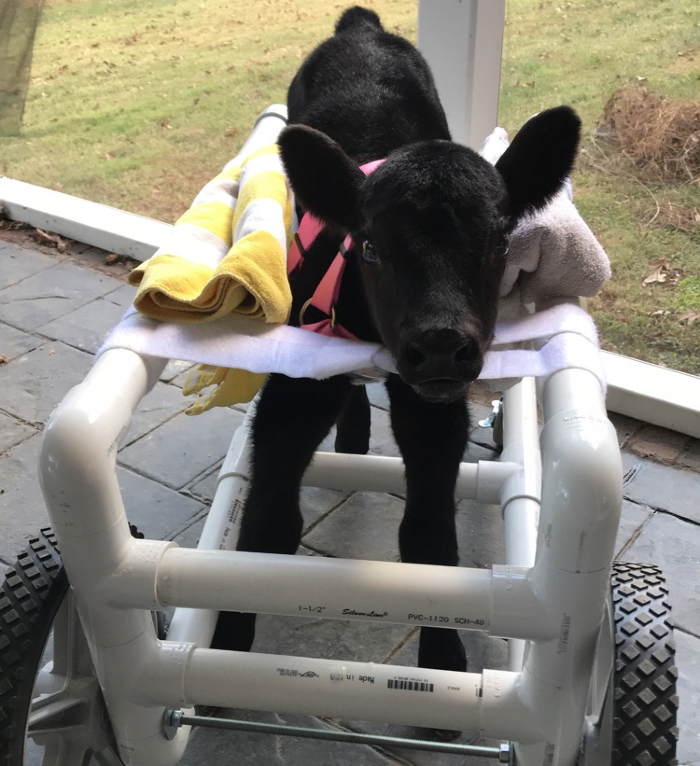 Lowla the day she received her wheelchair from Lowe’s. (Picture provided by Kathryn Russell)

The quick thinking of a local farm worker and a home improvement store helped save a baby cow.

Kathryn Russell, 21, who works as a show barn manager at High Ridge Farms in Albemarle, got word from neighbors last week that one of the farm’s calves, 3-day-old Lowla, had been injured and was likely going to die.

When Russell checked on Lowla, “she was pretty badly hurt.” She could not stand up, had blood coming out of her nose and could hardly breathe.

“When I found her, she was just wobbling all around,” Russell said.

Lowla could not support her head or her front legs.

“I was nervous because it’s my job to keep the cattle alive here,” she said. 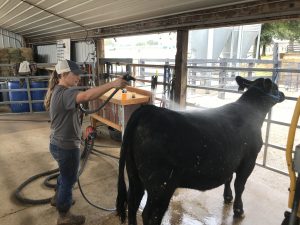 Kathryn Russell, who works at High Ridge Farms, cleans one of the farm’s cows.

Russell saw Lowla the day before and she was walking. She wonders if another animal kicked the calf or if Lowla suffered nerve damage.

Russell called a veterinarian who could not figure out the problem. He gave Lowla some medicine to ease the pain but said she likely would not survive the night.

To Russell’s delight, Lowla was still alive the next morning, but still struggling.

Russell picked up Lowla and carried her to her mother, who was standing in a chute, in order for the calf to receive milk.

With her boss’ permission, she ended up taking Lowla home to her family’s farm in Marshville.

Since Lowla had no control over her upper body or front legs, Russell decided some sort of wheelchair was her best option.

On Oct. 12, Russell called Lowe’s Home Improvement in Monroe seeking help. Once she explained her situation, an employee told her to bring in the calf.

Russell entered Lowe’s with the 6-day-old Lowla riding in a buggy.

A Lowe’s employee took Lowla’s measurements and in a few hours built a specially-designed wheelchair for the calf. The employee skipped his lunch break to finish the wheelchair, Russell said.

Once at home, Lowla, with the use of the wheelchair, started to walk.

With enough training from Russell, Lowla was able to walk unassisted for the first time in three days.

Russell has kept pushing her each day and Lowla has continued to get stronger.

Another milestone came on Tuesday when Lowla was able to stand by herself and walk a short distance without assistance from the wheelchair.

Though she still has balance problems, Russell expects Lowla, who still lives with her, to be able to walk fully on her own by next week.

Russell is grateful to the store for going the extra mile for Lowla.

“This is just one example of how Lowe’s will go above and beyond to serve their community and customers,” Russell posted on Facebook. “I can’t express how thankful Lowla and I are for the service we received today.”

Russell has documented every step of Lowla’s journey to recovery on Facebook.

As for the calf’s name?

The calf did not have one until Russell asked the Lowe’s employees for help coming up with one. She ultimately decided on “Lowla” as a tribute to the service provided by the employees at the store.