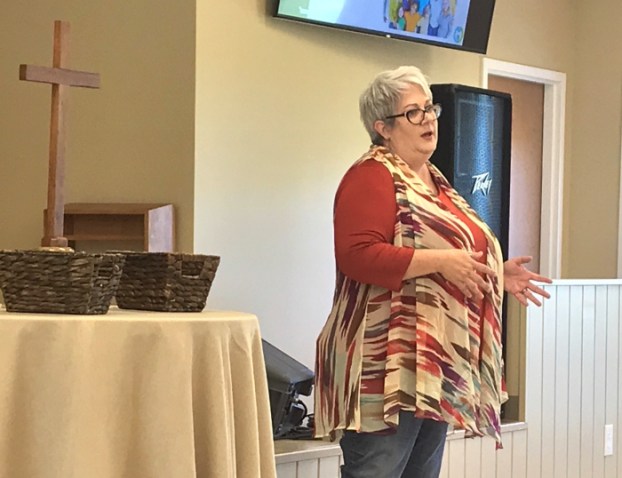 When it comes to helping people afflicted with drug addiction, Michelle Mathis emphasized the importance of “meeting people where they are” and addressing their specific needs.

Mathis, who is the executive director of Olive Branch Ministry, a faith-based harm reduction outreach organization in the state, said when trying to help people, there is no uniform plan that works for all.

Mathis spoke Thursday morning at Salem United Methodist Church during a breakfast event focused on the opioid crisis and how the community, especially the church, can help combat the issue. The breakfast was sponsored by the North Carolina Council of Churches, a statewide ecumenical organization that promotes Christian unity.

Mathis spoke to the crowd about the importance of harm reduction.

Similar to a child wearing a helmet while riding his bike or a person wearing a seat belt while driving, “we already implement harm reduction every day,” Mathis said.

She said harm reduction involves reducing high risk behaviors and the risks associated with them.

For people battling drug addiction, reducing high-risk behavior can mean going to a detox center or a clinic, getting medication-assisted treatment or reaching out to someone who will talk to them and listen.

Many people are scared to tell their loved ones or reach out to someone, she said, and so they often use drugs alone and are at a higher risk of overdosing and dying.

Mathis said what is most important is offering people hope that they can turn their lives around.

“At Olive Branch we say we extend hope and through extending hope we extend life,” she said.

There are many ways church congregations can get involved.

One of the simplest ways to help reduce harm is by using stigma-reducing language, Mathis said. Instead of referring to someone as an “addict” or “drug abuser,” use “person with substance use disorder.”

Calling the information helpful, Pastor James Laurence of First Lutheran Church in Albemarle said he is trying to figure out how the congregation can offer hope and healing to the community.

At the end of her speech, Mathis, who is a pastor, spoke about Jesus raising Lazarus from the dead. Though Jesus performed the extraordinary feat, it was the people who were willing to get close to Lazarus and untie him that were able to personally witness the miracle.

She challenged the crowd to be like the people who untied Lazarus.

“It’s messy, it’s not always pretty, it doesn’t always smell like flowers and you might get a little something on you, but the people who are willing to get in there and do work at the face-to-face level get to see the miracle and look it in the eye,” she said.

Baby calf fights through adversity thanks to wheelchair

The quick thinking of a local farm worker and a home improvement store helped save a baby cow. Kathryn Russell,... read more