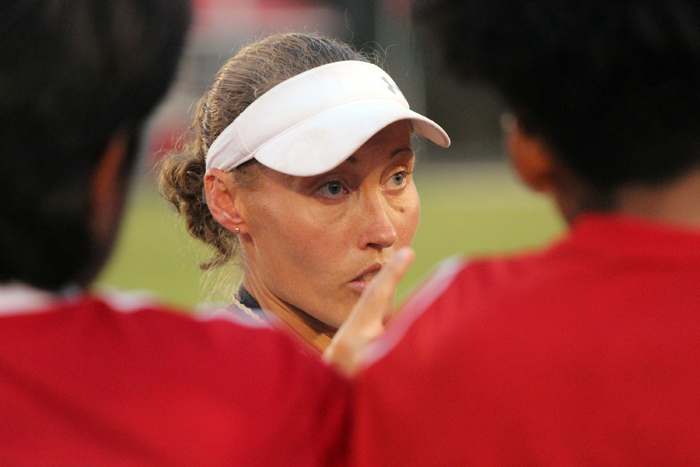 A program for elementary and high school students in the southern end of Stanly County looks to develop the game of soccer with a new type of training.

Futsal is an indoor version of soccer which requires more ball control in a smaller space than the outdoor version. The sport is governed by FIFA, the international soccer governing board, and has its own world cup.

The sport focuses on precision moves with the ball as a player moves down court on a surface where the ball rolls far more than on an outdoor soccer surface.

South Stanly head coach Jody Ledezma has incorporated some of the ideals of futsal into local clubs at Norwood and Aquadale elementary schools.

Ledezma found this sport after looking for a version for her son, 7-year-old Thaigo. Having played barefoot futsal for four years, the South coach said she can see the difference in his ability to control the ball.

“The difference is his play has been absolutely phenomenal,” Ledezma said.

In the local clubs at Aquadale and Norwood, players are not playing competitive games of futsal but are going through the drills of the game, learning to be more effective players on the outdoor pitch. 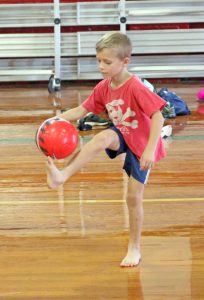 Evan Lambert controls the soccer ball with the top of his foot in a recent futsal youth soccer clinic at Aquadale Elementary. (Photo by Charles Curcio/staff)

“(Futsal) teaches kids (staring at) three years old to do stuff you normally don’t teach in American soccer until they are 12 years old. Then, it’s too late,” Ledezma said.

Young players learn to use more specific areas of their feet than the ones used to kick the ball, like the ball of the foot.

Playing barefoot also gives a player more feel for the ball, she said, with no shoes or socks getting in the way.

Doing futsal drills all winter leading into the spring, the teams at South Middle went from having never won to winning four games.

The next fall, her eighth-grade players moved up to the high school as freshmen and started to win there as well eventually.

“Most of my starting line up was freshmen,” Ledemza said. “Because they had that better control of the ball, we started winning games.”

Winning took a couple of seasons, though, but even in the first winless year, the number of times South was mercy ruled (beaten by nine goals) dropped to five times.

This season, the Bulls have wins over Anson County, North Stanly and South Davidson, along with a 2-2 tie against 3A East Rowan.

Ledezma said looking at the other schools in the conference, South Stanly is still an underdog but things are starting to improve in terms of wins and losses.

“We don’t have enough skill traditionally to play a normal structure,” she said. “We have to put up very high and rely on our speed a lot.”

The South coach said her hopes are when the kids learning futsal at Norwood and Aquadale move up to the middle and high school levels, the quality of soccer at the high school will improve.

“Jody has been a great asset,” South Stanly high school athletic director Sean Whitley said. “She has grown the (high school) program tremendously. Being able to field a JV team shows how much she has sparked interest in our soccer program.

“She also works with our feeder programs which is preparing and grooming the next wave of South Stanly soccer players.”