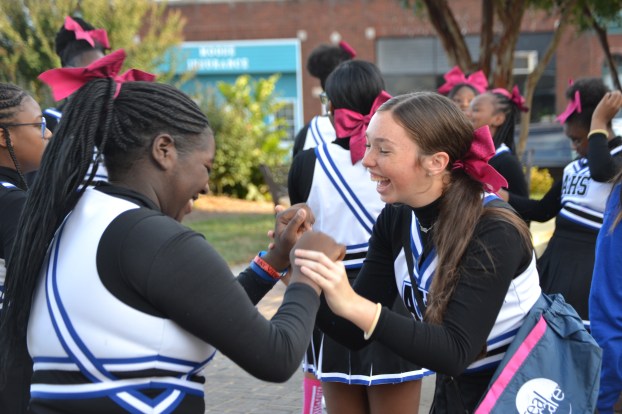 Community comes out in support of Albemarle football team

A lot of laughing, smiling and dancing pervaded the Courthouse Square Friday evening as supporters of the Albemarle High football team, clad in royal blue and white, showed up to cheer on the team before its game against North Stanly.

A portion of the downtown was temporarily closed for the rally.

The football players and cheerleaders took pictures, danced and mingled with many of the people who came out. The cheerleaders even performed a short routine.

“Our purpose for the Pep Rally was for the Albemarle High School students to know that they are appreciated, loved and supported in our community, and I felt that we achieved that goal,” ADDC director Joy Almond said.

“It was fantastic,” Principal Emily Shaw said about the rally. “Everyone had a great time and I look forward to doing it again. It meant so much to me to have the city involved with the events at AHS.”