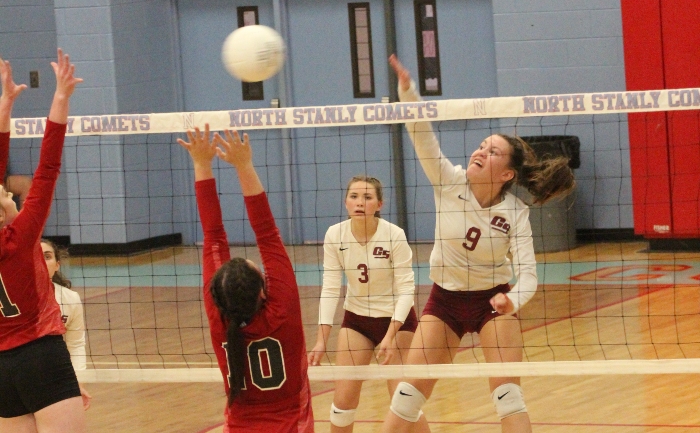 Margaret Huckabee goes for a kill in Tuesday's win for Gray Stone in the YVC semifinals. (Photo by Charles Curcio)

Earlier this season, the volleyball teams of Gray Stone and South Stanly came together to raise money for one of the Bulls’ players suffering from a form of cancer.

Tuesday’s rematch in the semifinals of the Yadkin Valley Conference tournament was all business between the two teams.

Gray Stone trailed 2-1 in the match but fought back to win the final two sets over the Bulls for a five-set victory.

Tuesday’s win was the third of the season for Gray Stone over South (12-12) and the second straight five-set win over the Bulls.

“The last time we played (South), it was very competitive. I love to play them because (of) the way we compete,” Gray Stone head coach Rebecca Carter said.

The win propels Gray Stone into the YVC finals Wednesday at 6 p.m. against a North Stanly the Knights lost to on the court twice but one of the wins was forfeited.

Having lost both games puts the Knights in an underdog role Carter said she is OK with it.

“Everybody thinks we can’t (win). In our minds, what do we have to lose? We come in and give all we can,” Carter said.

Mandi Stoyanov, who made the block on the final point in the fifth set to seal the win for Gray Stone, said her team has determination heading into the match with the Comets.

“I know all of us really want to beat North. They are a very good team. It should be good competition.”