Mary Ann Fisher had a big influence on Richfield, according to those who knew her.

Fisher died Oct. 18 at Trinity Place in Albemarle. She was 89. 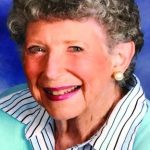 “I was broken-hearted” upon hearing the news of her passing, Councilman Terry Almond said. He was away on a fishing trip when his wife broke the news.

Almond served on the town council for many years with Fisher and they attended the same church, Mt. Zion Lutheran.

He first met Fisher in high school at North Stanly. Her oldest daughter, Judy, was one of his classmates.

Almond said she was strong in both her religious and political beliefs, though she was more than willing to get along with those that did not agree with her.

“She was just a good civic leader,” he said.

Fisher served on the council for 17 years and also founded and chaired the Party in the Park committee.

She graduated from Pfeiffer University and taught in Stanly County Schools.

She brought a unique perspective as a member of the town council, one that was welcomed by the other members, Almond said.

“Sometimes us men didn’t see things the way the ladies do and she let us know really quick that we were missing a point or should be thinking about other things.”

Mayor Terry Deese knew Fisher well. She was his neighbor growing up and she lived three doors away before she passed.

He said his children would often swim in her pool.

She was a “go-getter” who would always do her job and expected others to do their job as well, Deese said.

Fisher was also devoted to her family.

Deese said there was never a time when family members were not at her house.

“Her family, that’s what kept her going,” he said. “She was a wonderful neighbor, a very good friend and a great citizen for Richfield.”