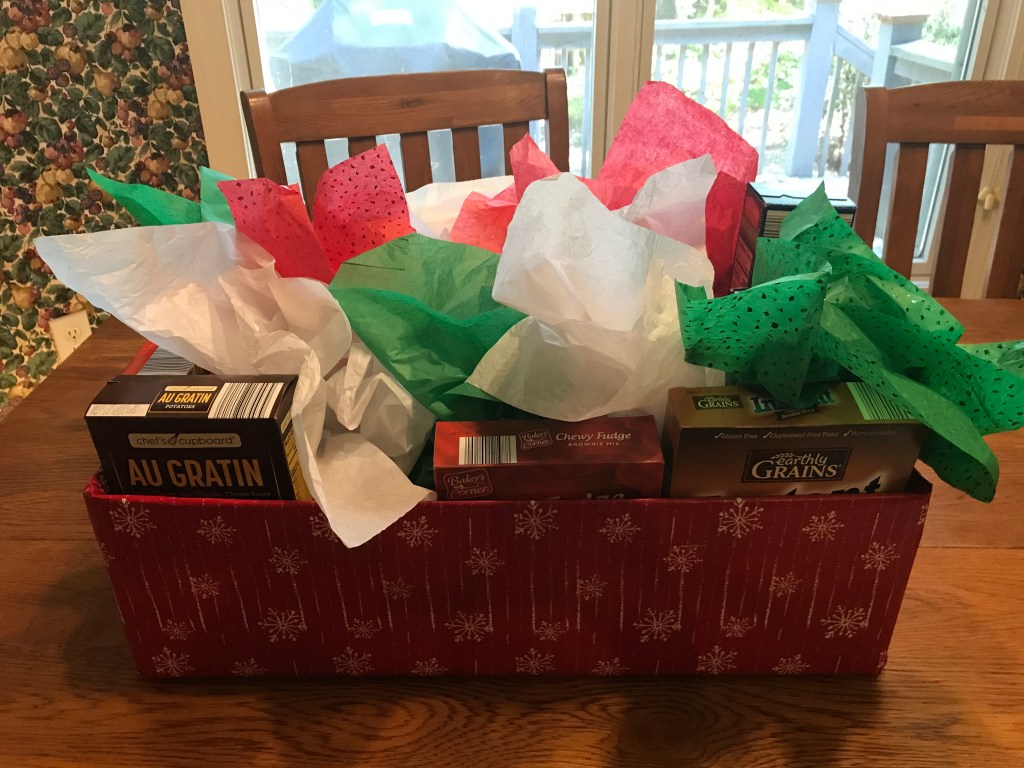 One of Carolyn Davis' pantry boxes in her campaign to feed the hungry.

Inspired by the work of West Stanly Christian Ministries, one local woman has decided to start a volunteer effort of her own to help the organization provide for families in need during the holidays.

Carolyn Davis, along with daughter Katie, has been volunteering with WSCM for the past few months. They recently decided to create a community project designed to make sure less fortunate families in the area do not go hungry during the holidays.

The project, titled Give Thanks by Giving, will take place in November. It involves families or small groups decorating pantry boxes and filling them with essential foods. The boxes would then be delivered to WSCM.

“This is a community project to inspire kindness and gratitude,” she said.

The pantry boxes would be a gift that would alleviate families of some of the financial burdens of the holidays, she said.

“Many times people want to help out, but they don’t quite know how to help,” she said.

Davis first mentioned the project on her Facebook page in September, which received a lot of positive feedback with people sharing the post and saying they would participate.

She has also talked with WSCM about the project.

“I was incredibly excited,” WSCM Executive Director Robert Britt said when Davis told him her idea. “It’s always encouraging to me when a volunteer comes in to help and is able to appreciate the greater vision and the greater purpose that West Stanly Christian Ministries is here for.”

Davis is hoping to have at least 150 pantry boxes of food. She said that’s around the same number of families WSCM helped out during its annual Day of Giving event last year.

Initially hoping to have 35 to 50 groups join the effort, Davis said so far around 80 have pledged to create the pantry boxes.

People can either place all the food in the box at one time, or they can have fun with it and place one food item per day in the box.

She plans to have people deliver the boxes to WSCM around Thanksgiving. Groups are more than welcome to donate multiple pantry boxes.

Britt said feeding families around Thanksgiving “is always a need that we have.”

He said WSCM will be able to take the boxes from the donor’s hands and put them directly into the recipient’s hands.

She posted a recent Facebook video describing the project and how people can go about constructing their pantry boxes.

Davis would like the food items to be uniform throughout each of the boxes.

If anyone is interested in participating, email Davis at cxdavis@hotmail.com or message her on Facebook (Carolyn McCulloch Davis). She is keeping a list of those who have pledged to participate.