Stanly drops out of top 10 in opioid overdoses

Stanly County dropped out of the top 10 in the state for opioid overdoses showing up in hospital emergency rooms in September, according to data recently released by the N.C. Department of Health and Human Services.

Stanly has led the state in opioid overdoses for many months over the past year, including  July and August. For September, Scotland had the highest rate of opioid overdoses.

The county had seven people overdose and visit the hospital in September, down from 11 in August. It is the lowest amount since the county had four in June. 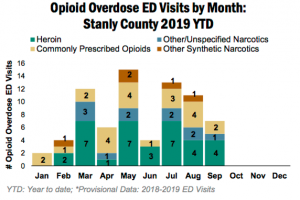 But each month’s overdose numbers are not a predicator for the subsequent month’s numbers.

While paramedics responding to overdoses notice busier months than others, they are unsure why.

“I don’t really know a rhyme or reason for it (the fluctuation) specifically,” community paramedic Ashley Hernandez said.

She said the overdose numbers can fluctuate day to day.

“Some days we’ll have four or five in one day and the next day we’ll have none,” she said.

But the numbers released by the state tell only part of the story, as many people who overdose never go to the hospital.

Hernandez said likely nine out of every 10 people paramedics encounter in the county do not go to the hospital after they receive Narcan, a medication that reverses opioid overdoses.

Statewide, 556 opioid overdoses resulting in hospital visits have been reported through September, down from 630 for the same period last year.

Of the seven overdoses, four were from heroin, two were commonly prescribed opioids and one was unspecified narcotics.