A Troy woman involved in the accident that killed Norwood resident Kimberly Elaine Ingold is scheduled to appear in court Thursday.

According to the Highway Patrol accident report, Haywood was heading east on N.C. Highway 24 in Biscoe Sept. 7 when she collided with two cars driving west, one driven by Ingold. 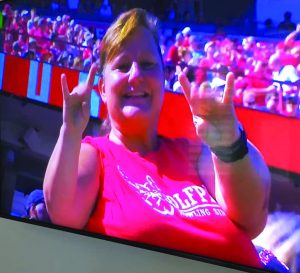 Anson County teacher and Norwood resident Kim Ingold died in a head-on collision on her way home from an N.C. State football game. This photo is taken from a game last fall. (Facebook)

The accident report lists four witnesses to the crash.

According to the report, all three vehicles involved in the accident were traveling at about 55 mph.

Haywood still has pending charges of speeding and reckless driving to endanger, as well as an alleged infraction for improper equipment (speedometer), after being pulled over May 13, according to online records.

Haywood was allegedly traveling at 83 mph in a 55 mph zone when she was pulled over, according to Trooper N.J. Talley’s comments in a citation.

Haywood told Talley she had sped up to pass another vehicle.

“… As she was trying to pass the Jeep, they sped up, causing her to increase her speed,” Talley wrote in the report.

She did not own the car she was driving, but planned to buy it, and said the speedometer was not functioning properly, reports indicate.