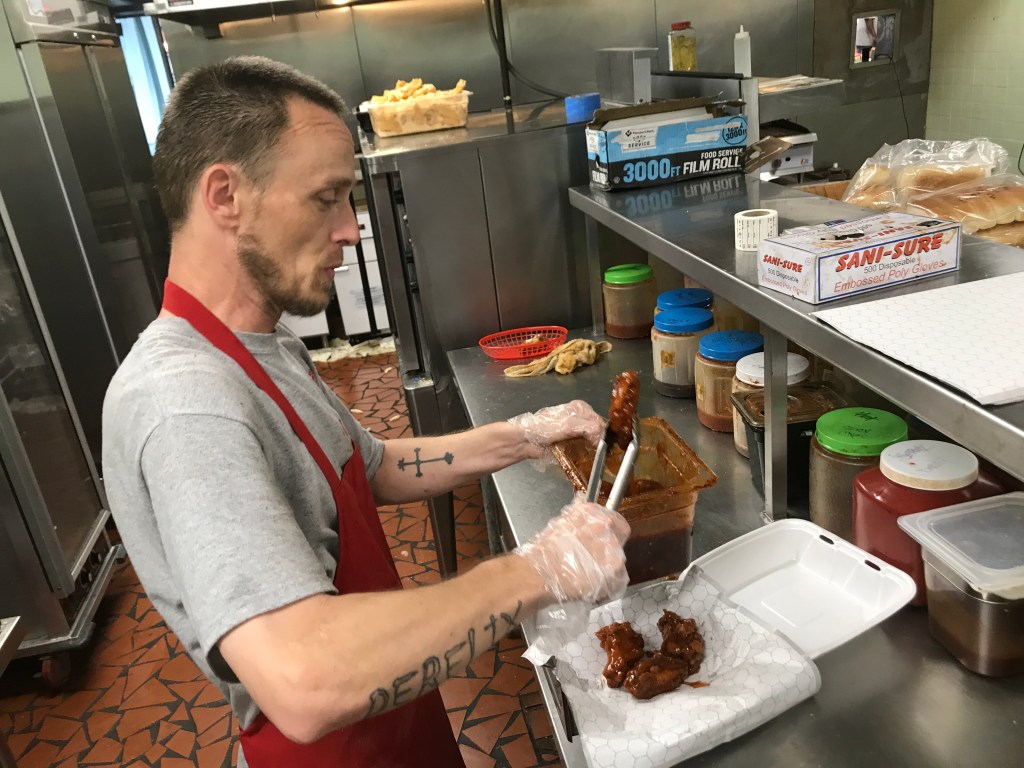 The funky sign above the old Western Steer building off U.S. Highway 52 North proclaiming the new restaurant as the “Home of the Chocolate Fried Chicken” is the first clue that the Carolina Wingz Factory is unique.

“The sign got me really curious…because I have never seen that in any other restaurant before,” Laura Reddersen, a customer trying Albemarle’s newest wing place Tuesday, said. 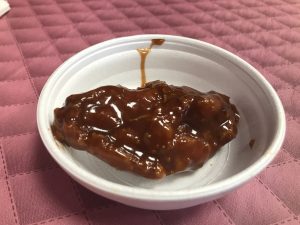 Chocolate chicken is a restaurant specialty.

Carolina Wingz Factory, which opened Oct. 24, is like a laboratory for testing different wing sauces.

Customers that have come in have been able to sample the chocolate chicken wings.

And the Willy Wonka of this factory is co-owner Dennis Bridges – though he considers himself more of a “sauceologist.”

“I’m rebuilding their taste buds one wing at a time,” Bridges said.

Originally from Connecticut, Bridges, 54, has lived in North Carolina and worked in the restaurant business for 18 years.

He later worked as a general manager at the Speedway gas station on N.C. Highway 24-27. It was there he met Phillip Bowers two years ago.

The two became friends and talked about opening a restaurant together, which they eventually turned into a reality with Carolina Wingz Factory.

Bridges works in the kitchen, coming up with different wing sauces, while Bowers works the front of the restaurant. 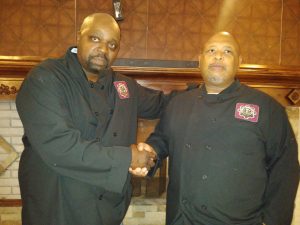 Bridges is constantly experimenting with sauces to apply to his wings.

Some of his sauces include eggnog, apple pie, fireball whiskey and sweet potato.

Though the current menu only has 10 house sauces, Bridges said he can make more than 200 combinations. He plans to introduce them all.

Bridges will have weekly, monthly and seasonal sauces. Each is homemade.

He enjoys the fact that many of his wing flavors cannot be found at traditional establishments.

“I want something unique, something that nobody has ever had,” he said.

Bridges encourages customers to give him new ideas for sauces.

If they have an idea for a new sauce, Bridges will try and make it and, if he’s successful, he’ll name the sauce after the customer.

One of the craziest wing sauces he remembers creating was cookies and cream.

The restaurant also offers burgers, hot dogs and fried ribs and fried cauliflower, which can both be coated in any of the sauces.

But for all of his creations, the sauceologist is most-known for his chocolate chicken wings.

Bridges has been cooking wings for about 12 years.

The first sauce he created was a steak sauce while working at a Ryan’s in Greenville.

“It tasted good on wings and I went crazy,” he said.

The self-proclaimed sauceologist was born.

About six years ago, one of his friends asked him to make a chocolate sauce for his wings.

The idea of creating a chocolate sauce “never crossed my mind,” Bridges said, “but once he put that thought in my head, I was like ‘hmm.’ ”

He quickly went to work creating a chocolate barbecue sauce and enjoyed the final result.

“I wanted to slap myself,” he said.

People were initially hesitant, thinking the chicken would be covered in a thick chocolate coating, similar to foods enjoyed at the fair.

But once they tried his wings, which give off only a subtle taste of chocolate, the sauce became the restaurant’s most popular item.

While the idea of a chocolate sauce is quite novel to many in North Carolina, Bridges said the sauce is common out West, especially in California, and also in Atlanta.

Beyond his wings, Bridges hopes to expand the restaurant’s interior.

A game room is being created that will feature pool and air hockey tables and video games. Bridges is also planning on adding corn hole boards outside.

He hopes people will appreciate the staff and that the food will complement the service.

Kitchen manager Jeff Bigham likes the fact that everyone is contributing to create a new place for people in the area to enjoy.

“We’re starting the foundation from the ground up,” he said. “Instead of everyone just coming into a known establishment we’re building this together and that’s the important thing.”

And how is the famed chocolate chicken?

“I’m very picky and I like the chocolate chicken,” Reddersen said. “It was delicious.”