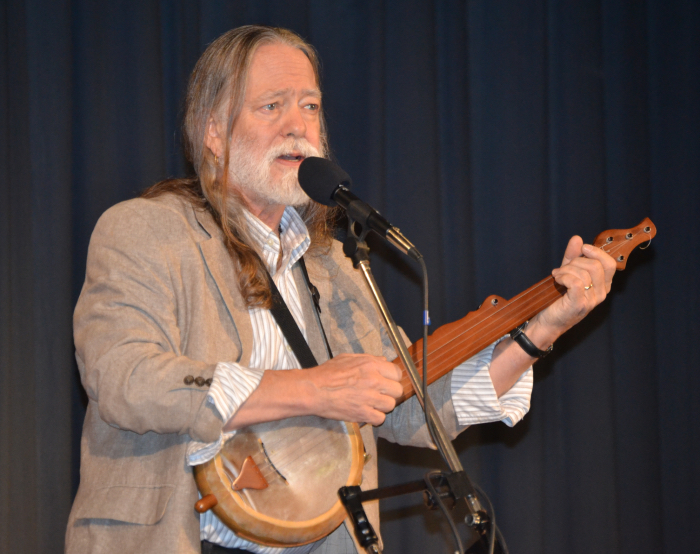 Scott Ainslie performs a song on his gourd banjo for freshmen and sophomores at Albemarle High School.

The Albemarle High auditorium was filled with joy Monday afternoon as freshmen and sophomores were clapping their hands, stomping their feet and singing along to the music of Scott Ainslie.

He first learned to play music when he was 3. He now can play many types of instruments, though his favorite is his voice.

According to the bio from his website, Ainslie has studied with elder musicians in the Old-Time Southern Appalachian fiddle and banjo traditions, as well as gospel and blues.

“When a painter goes to work they want a blank piece of paper, when a musician goes to work, silence is what they’re after,” he first told students. “I’m going to paint on your brains with sound and information that I’m hoping you’ll enjoy.”

Ainslie performed blues, rhythm and blues and ragtime. He spoke about the history behind how the musical styles came to be.

For instance, he said some of the earliest rock’n’roll rhythms were preserved and danced to in the black community on instruments such as the cigar box guitar, which often has only one string.

Ainslie also performed a song in which he enlisted the help of the students to repeat several of the words, also known as call and response.

“We have a conversation in music between us,” he said referring to the musical style which originated in West Africa.

The last song he performed, to much applause, was Sam Cooke’s classic “A Change Is Gonna Come,” which he said was inspired by Bob Dylan’s “Blowin’ in the Wind.”

Though he lives in Vermont, Ainslie spent almost 20 years in eastern North Carolina.

Besides having produced six CDs, Ainslie has traveled the country for the past 35 years performing. He loves interacting with students and teaching them about musical genres and how they are connected.

“Teaching is an act of faith,” he said. “We may not see the crop, but nothing will grow if we don’t plant the seeds.”

At the end of the performance, during a question and answer session with the students, he imparted upon them some sage advice.

“I encourage you to find the thing that lights your fire…and then chase it as far as you can,” he said. “Don’t give up the stuff that sparks your imagination and your joy.”