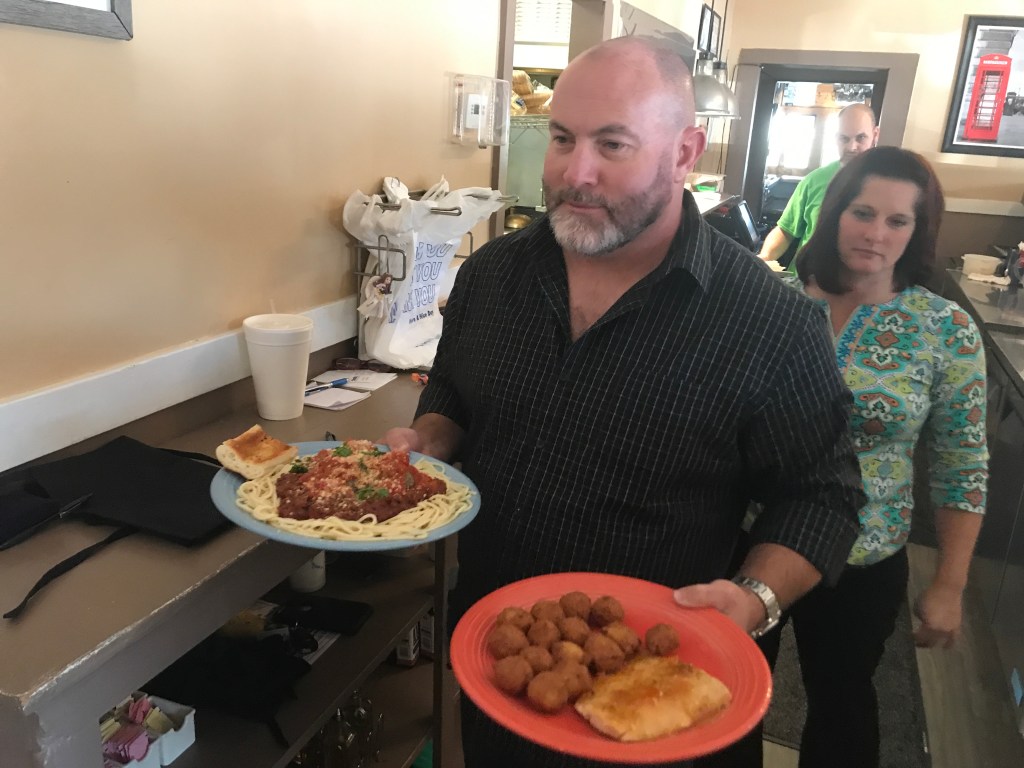 Harmanco's owner Kevin Limer brings out plates with his wife Jamie behind him.

One of Albemarle’s landmark restaurants has recently changed ownership.

Steve and Voula Kambouris have sold Harmanco’s to Jamie and Kevin Limer. Their first day as new owners was Oct. 21.

Originally from Mint Hill, the Limers moved to Albemarle last August and quickly became regular customers at the restaurant, enjoying the food, staff and family atmosphere.

“A lot of our neighbors were in here in the afternoon chatting at the bar and I would come in just to catch up on what was going on,” Kevin said.

“I loved the bar,” Jamie said. “The bar is like ‘Cheers’ — it is the same people coming and sitting in the same seats. We loved it.”

They also got to know the Kambourises, who lived in the same neighborhood. Once they heard the owners were thinking about selling the restaurant a few months ago, the Limers discussed buying it.

The Kambourises are the third owners of the property, which originally opened in the 1940s as a drive-through burger joint. They owned the restaurant for 11 years.

While they were sad to give the restaurant up, they are confident it is in good hands.

“It’s hard to give it up after so many years, but we know they’re going to do very well,” Steve Kambouris said. “They have a lot of great ideas.”

The Kambourises are planning to move to Florida. 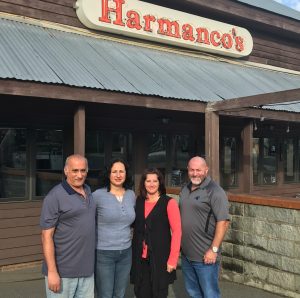 Jamie wanted to buy the restaurant to help preserve a place that has meant so much not only to her family, but to so many people in the county over the years.

“I had met so many people here in Albemarle that would tell me stories that they met their spouse here or met their best friend here or had high school reunions here,” she said. “It has a special place in so many people’s hearts.”

Though Kevin initially had a few reservations about buying the restaurant, “the idea grew on me,” he said.

They both also wanted to get jobs closer to their house in the city.

Kevin and Jamie both have experience in the food industry. Jamie worked part-time in restaurants growing up. She said she has experience as a cook, dishwasher, hostess, server and manager.

Kevin’s family worked in the catering business when he was younger.

Jamie went undercover during the transition period, working a few days a week for a month as a server, learning more about the staff and the inner workings of the restaurant.

Kevin said the Kambourises are staying around to help make sure the transition is as smooth as possible. They have also given the Limers the recipes for every meal on the menu.

Though the Limers plan to keep the essence of the restaurant the same, there will be some changes, starting with the name.

“We definitely wanted to keep the name, but instead of Harmanco’s it’s Harmanco’s Family Restaurant,” Jamie said.

Honoring their Scottish heritage, the Limers have created a Celtic knot image, which will be the new logo for the restaurant. They also came up with a motto: “Loving our neighbors one meal at a time.”

The new logo and motto will be revealed during the restaurant’s grand opening on Saturday. The opening will feature music from Thom Crumpton and Ranger Tucker.

Though the menu is the same, the Limers have several changes in mind.

Jamie said popular daily specials will soon be incorporated onto the menu while dishes currently on the menu that aren’t doing well will be taken off.

She also wants to add more vegetables, including collard greens, sweet potatoes and pinto beans. She wants to make sure the vegetables are coming from local farmers.

“We want to bring as much fresh food in as possible,” Kevin said, “while keeping the things that everyone loves.”

Beyond the food, the Limers want the restaurant to be a place where people can come and enjoy themselves.

“I want this to be the go-to place,” Jamie said.

Their plans include having designated nights for music bingo, trivia, karaoke, live music and also nights where people can dress up for different decades.

During football season, they plan on having wing specials. During the offseason, they would like Bible trivia each Sunday.

Starting next year, Jamie would also like to feature food from a different country each month.

“If you manage to do something slightly different every week, it keeps people interested,” Kevin said.

They have talked to customers about potential changes and encourage customers to offer up their own ideas. The Limers have a suggestion box at the front of the restaurant where customers can share their ideas about the restaurant’s future.

Many customers are loyal to the restaurant and have already gotten to know the Limers. 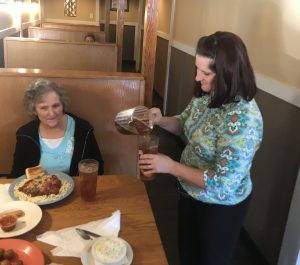 Bill Eutsler eats at Harmanco’s with his wife Connie many times throughout the week. He likes the Limers’ “friendly smiles” and “the welcome feeling that you get” coming into the restaurant.

They ultimately plan to pass the restaurant to their children so it can stay in the family.

“I want this to be a place where people can go, feel safe, have fun and hang out with their friends,” Jamie said.