Recruiting rolls on for West Stanly running back 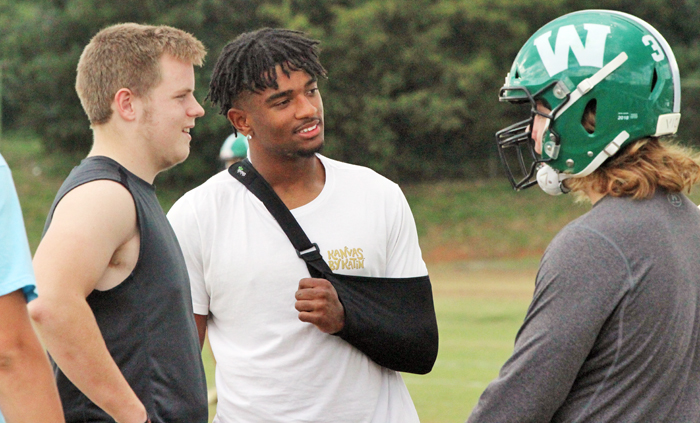 Jordan Poole shares a moment with his West Stanly teammates in practice. Poole is likely out for the rest of the season with a sprained shoulder. (Photo by Charles Curcio)

When a high school football player is 6-foot, 1-inch tall, weighs 225 pounds and can run the 40-yard dash in 4.6 seconds, college scouts and coaches are sure to follow.

Such is the case of West Stanly running back Jordan Poole, who has received five NCAA Div. I offers.

Poole’s head coach Brett Morton said talented players like the junior do not grow on trees in south Oakboro.

Morton, who played at West on the offensive line in high school, said Poole represents Oakboro well to the various colleges scouting him.

“Every single coach that has come away from talking to him were like, ‘Man. That’s a good kid.’ I told them that up front,” Morton said. “(Jordan) has got a great personality. He works hard…it’s not just his ability.”

His speed carrying the football and powerful tacking style in the Colts secondary are well documented on various recruiting websites.

When people see his videos, Poole said he hopes they see how well he plays the game.

“I’m just an athlete that can ball,” Poole said. “I don’t play on a big stage…but I’m still making a lot buzz. It shows that if you can play, they will find you.”

Being recruited to play college football is something he has dreamed about, but Poole said he did not realize how quickly things would happen.

After showing promise at college camps before his freshman and sophomore seasons, Poole’s recruiting hit its stride this summer. He participated in six camps of ACC and SEC schools.

Many of the coaches on the West staff have taken Poole to some of those camps, which the junior said means a lot. He also credits his youth football coaches.

“He knows what to do at all times,” Poole said. “He could draw up a play in his head and see it work for anybody.”

The offers from Virginia, N.C. State, South Carolina, Virginia Tech and East Carolina are a blessing, Poole said, but he hopes to earn a few more.

With so many choices, Poole said he wants to find a school where he will be comfortable even when not playing football, a place which feels like home.

He has continually changed on what his major will be, but no matter what he picks, academics are important for him.

“If I get hurt, I could still get my education,” Poole said.

The one thing he had hoped to avoid was injury, but a hit from a Montgomery Central defensive back has put Poole out for at least four weeks with a separated AC joint in his left shoulder.

Like most football players at the end of the season, he was playing hurt, having a grade-one separation heading into the game.

Surgery may be needed down the road, but football is a game Poole loves. The junior said he has played through injuries before and will work hard in the off-season to come back next year.

Despite all the attention, Poole said he tries to stay grounded.

“I’ve always been one to think if you stay humble, you’ll get more blessings, so I try to be a regular student and don’t let that stuff get in my head,” Poole said.

Going into Friday night’s game, the Colts were 8-0 for the first time in the school’s history. Poole credits his teammates for the effort they have put into the season, which has brought more attention to his recruiting process.

“They believe in me, so it really picks me up,” he said. “I feel like I need to perform well for my teammates.”

He said the faith from his teammates and his inner strength will help him come back from what he called a little adversity.

“What you do with adversity shows who you really are,” he said. “Bouncing back and doing even better will show my character and the type of person I am.”