North finishes second in YVC with win at South 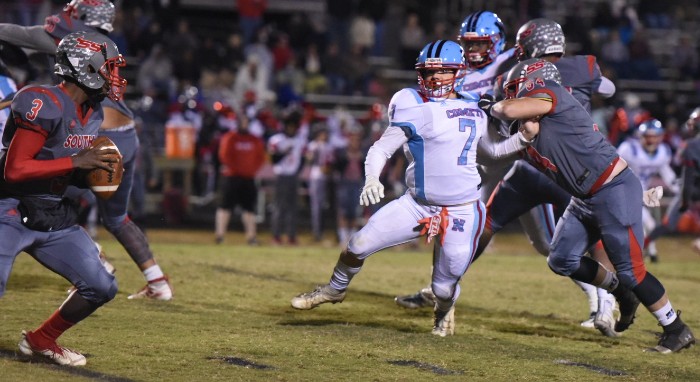 North Stanly's Gabe Hogan (No. 7) tries to get past a South blocker to put pressure on South Stanly quarterback Jaquez Cooke. (Photo contributed by Dawn Lucas)

In a showdown for second place in the Yadkin Valley Conference, the North Stanly Comets got big offensive numbers against host South Stanly through the air and limited the Bulls’ offense in a 43-13 road win.

North Stanly (6-5, 5-1 YVC) earned second place with the win along with a home game in the 1AA state playoffs Friday.

The No. 7 seeded Comets will rematch with South Stanly. The Bulls earned a No. 10 seed.

North’s win Friday came in part by putting pressure on South quarterback Jaquez Cooke. The senior QB finished with 204 yards passing for the Bulls (5-6, 4-2) but was just 12-of-26. He was also sacked five times by the Comets.

“That was our game plan from day one,” Comets head coach Crisco said, adding North had played other teams which ran an offense similar to South but neither having an athlete like Cooke.

Crisco credited his defensive coaches for the game plan saying you can’t contain Cooke the whole game but the goal was to make him uncomfortable.

Meliek Bryant, a sophomore defensive tackle for North, said the Comets’ focus was to contain Cooke.

“You could tell by his body motions, he wasn’t (playing) his whole game in the whole game,” Bryant said.

Sophomore QB Luke Shaver had one of his best games in his first season as the varsity signal caller for the Comets. Shaver threw for 164 yards on 8-of-16 passing with three touchdowns.

Shaver said his offensive line was everything in the win and the reason the offense was successful.

North’s QB said 2019 has been a learning season for him and time spent at various camps in the offseason have helped.

The Comets scored on the team’s first two drives of the game before South broke through late in the first half when South’s Marcus Green scored a long touchdown to cut North’s lead in half.

Shaver found Joseph Benfield for a 40-yard TD pass, then after a Cooke fumble recovered by North, Christian Barber scored a 28-yard rushing touchdown, both coming just before halftime.

South got as close as 16 points with a long scoring drive in the third quarter but North pulled away with two fourth-quarter touchdowns.