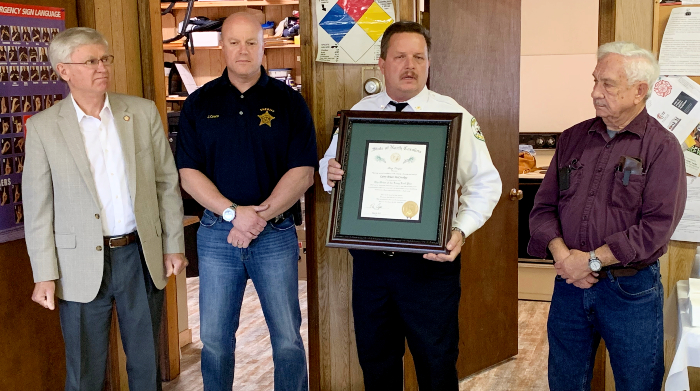 At a reception Sunday afternoon at the Stanly County Rescue Squad office, Larry McCroskey was honored by his peers and members of the local law enforcement and rescue community for his 52 years of service.

Rescue Chief Robert Wilhoit said it hit him like a ton of bricks when McCroskey told him he was retiring.

“We’ve been through a lot together,” Wilhoit said.

Wilhoit presented McCroskey with a quilt bearing logos from the departments of Bethany, Badin and East Side fire departments with whom he served along with the Stanly County Rescue Squad.

“This man has held every one of these positions,” Wilhoit said.

He also was presented a certificate from N.C. House Rep. Wayne Sasser and Stanly Sheriff Jeff Crisco showing McCroskey has received the Order of the Long Leaf Pine.

The honor is granted by the Office of the Governor to people who have shown 30 or more years of extraordinary service to the state.

“He’s been a father figure to me…we have had a lot of years together,” Wilhoit said.

“He taught me all about the rescue world, how to handle calls, how to treat people and how to be a good citizen and volunteer,” Wilhoit said.

“It’s very, very nice and appreciated,”McCroskey said. “Not too many get it.”

Volunteering was something McCroskey said he sort of fell into.

“It was a lot of calls on the river, a lot of wrecks. It’s just been amazing,” McCroskey said.

Crisco said he remembered McCroskey from back in 1992 when he started in the police department.

“He devoted his life to this, not just rescue but providing emergency services to the county,” Crisco said. “Not only has he been working, but his experience is teaching it, too. He’s been instrumental to this county.”

Sasser said having someone commit 50 years of their life to community service is a rarity. He credited McCroskey for his time spent training and recruiting others to become volunteers as well.

“If you don’t have longevity and if people are not committed, what you committed your life to will deteriorate,” Sasser said. “Fifth-two years of volunteering is to be commended.”

Having also trained a number of personnel, McCroskey said the support system he had around him meant he had some good help.

“The guys have been very good to me,” he said. “I just decided it was time. I’m getting old enough. It’s time to go.”