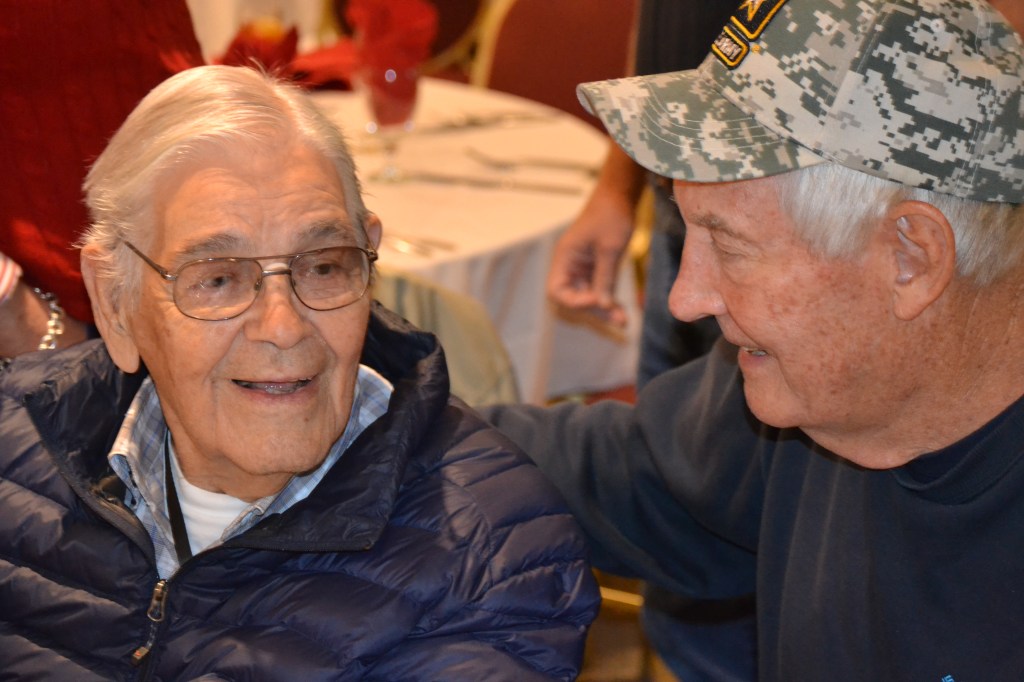 L.C. Miller enjoys a conversation with Harold "Wayne" Huneycutt during the Veterans Day Luncheon at Atrium Health Stanly in 2019.

Will Taylor served in the Army National Guard for four and a half years, including time in Iraq.

“It was one of the most important experiences of my life,” the 37-year-old lawyer who lives in New London said.

While his time serving was one of the hardest things he has ever done, he said it is also one of the things he is proudest to have done.

Inspired by several of his family members who served in the military, Taylor wanted to follow in their example while also wanting to “have an adventure.”

He said he got to have his adventure as tank platoon leader in Iraq in 2005.

Taylor was just one of the 60 veterans who were in attendance for the annual Veterans Day luncheon at Atrium Health Stanly.

J.D. Mullis served in the Air National Guard and was stationed in Badin and Texas.

To him, Veterans Day “is a thank you to all who served,” especially those who served in Vietnam.

Harold “Wayne” Huneycutt was part of the Army and was stationed numerous places.

He said veterans made sacrifices being away from their homes and families and while “some paid some, some paid all.”

It was due to the sacrifices of veterans from around the country that has helped America become the free nation it is today, he said.

L.C. Miller served in the Navy and traveled throughout the Atlantic and Pacific during World War II on the USS Alfred A. Cunningham, a Navy destroyer ship. He served three years in the war.

“It was good that I was able to help my country,” Miller said.

Walt Deppe was a combat engineer and demolitions expert in the Army, where he served for four years. He was later in the Army Reserves and National Guard for 16 years.

For Deppe, Veterans Day means “honoring everybody that served from War World I on.”

He regularly does his best to attend both the luncheon each year and the parade in Oakboro.

“It feels good to be honored for your service,” Deppe said. 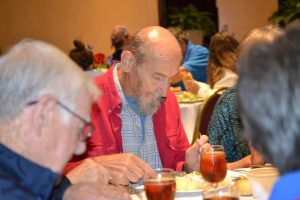 Walter Deppe served in the Army for four years.

Veterans Day is a “moment to praise God” for Ronny Hinson, who served two years in the Army as a medical corpsman, including one in Vietnam.

There are roughly 112,000 active duty and reserve members of the military in North Carolina as well as 736,000 veterans that reside throughout the state, according to Atrium Health Stanly Facility Executive Brian Freeman, who spoke during the event.

The keynote speaker for the event was Lt. Col. Rachel Mallette. She is the chief nurse executive for the 156th Aeromedical Evacuation Squadron of the N.C. Air National Guard.

Mallette, a West Stanly graduate, spoke to the crowd about her 34 years of military service, including deployments to Saudi Arabia, Germany, Northeast Africa and Afghanistan.

A vacant table was reserved at the luncheon to honor the missing service members from each of the military branches. 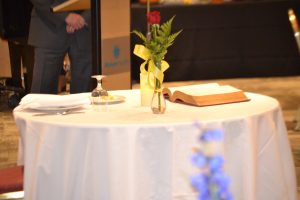 A vacant table was reserved for all of the missing service members in each of the branches.