The Division of Adult Correction and Juvenile Justice has named Kenneth Diggs as the new warden of the Albemarle Correctional Institution in Badin.
He had been the associate warden for custody/operations at the prison since 2016. 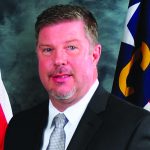 Kenneth Diggs is the new warden at Albemarle Correctional.

“Warden Diggs is a proven leader with a steady hand and positive outlook,” Commissioner of Prisons Todd Ishee said. “He is an exceptional correctional professional with decades of institutional knowledge who will work hard to keep the staff, offenders and the general public safe.”

In his new position, Diggs is responsible for all operations at the prison, which houses male medium custody offenders.

The facility offers a domestic violence prevention program and educational opportunities, including a course to prepare offenders to complete the high school equivalency exam, as well as courses in computer applications and electronics technology taught by instructors from Stanly Community College.

Diggs began his career as a correctional officer at Brown Creek Correctional Institution (now known as Anson Minimum) in 1991. He progressed through the ranks as a sergeant, lieutenant, special operations captain, and assistant superintendent while at Brown Creek.

He transferred to Albemarle Correctional Institution as the associate warden in 2016, when Brown Creek was consolidated into the Anson facility.
Diggs also has 18 years of experience as a training instructor.

He is a certified general instructor for the Department of Public Safety, with specialties in firearms and control restraint defensive techniques. He has also been a member of the Prison Emergency Response Team, Drug Interdiction Team and Piedmont Region Intelligence Team.
Diggs holds an associate degree in criminal justice from Stanly Community College.

He is married with one daughter. His hobbies include beekeeping and traveling.