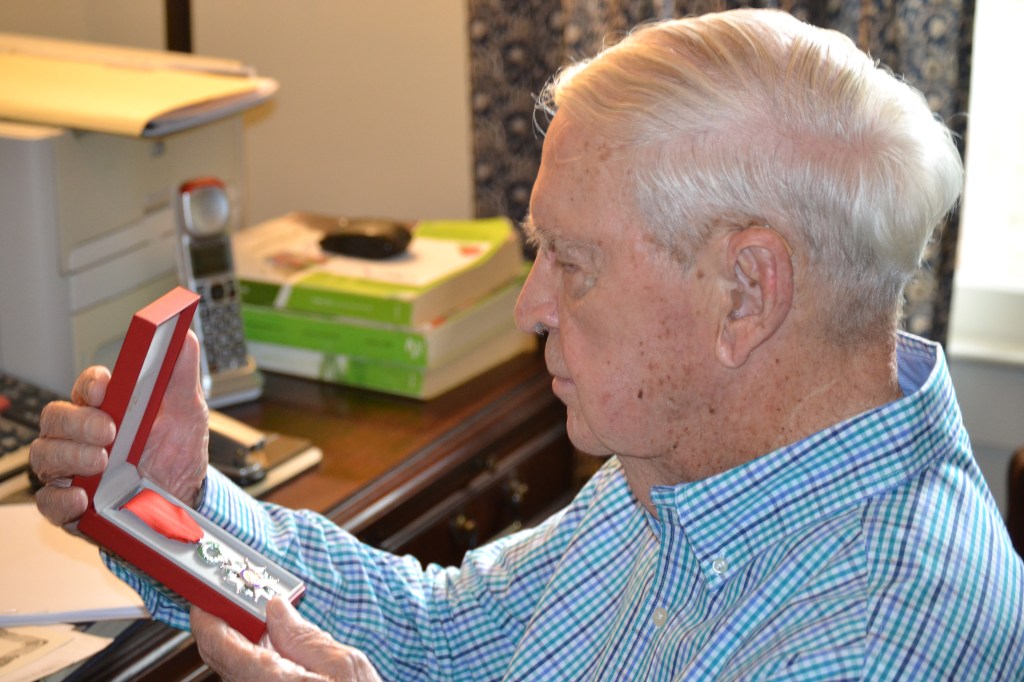 James Nance looks at his French Legion of Honor award, which he received in 2015.

The American soldiers who fought during World War II are often referred to as the “Greatest Generation.”

The term originated from the title of a book from journalist Tom Brokaw. He profiled several Americans who grew up during the Great Depression and served during the war.

In the book, Brokaw wrote, “it is, I believe, the greatest generation any society has ever produced.”

One such member of this generation is Albemarle resident James R. Nance. He was a member of the 100th Infantry Division, which landed in Marseilles, France in October 1944. Nance served in Company E, 397th Infantry regiment.

Nance, now 94, wrote a memoir for his family more than a decade ago called “The War Years,” recounting his experiences.

For six months, 19-year-old Nance and his fellow soldiers fought in France and Germany in some of the key battles in the European theatre. His role was to carry the radio and remain close to company headquarters. 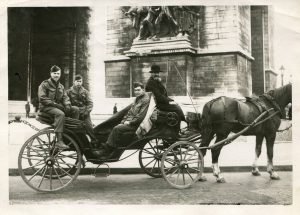 James Nance, center, with two of his fellow soldiers while on a furlough in Paris in 1944.

One of the fiercest battles Nance’s infantry was involved in occurred in the small French town of Rimling in January 1945.

After German artillery attacked Company E, damaging the phone wire the soldiers used to communicate, it was up to Nance and another soldier to travel outside, in the midst of heavy snow and vulnerable to German attacks, and repair the connection.

“We were out in the open ground with snow all around, hoping that the Germans did not see us and that a shell would not come in on us while we repaired the line,” he wrote.

Nance said it took him about 20 minutes to fix the connection and return to company headquarters in town.

His company stayed in Rimling for four days. As the company was preparing for a heavy German onslaught, Nance and others were preparing for the attack. Nance was on his knees beside a window overlooking the side of the house holding a grenade, ready to pull the pin if any Germans entered the house.

Just as Nance and the other soldiers were preparing for a firefight, orders came for them to evacuate the town.

Nance was awarded the Bronze Star for Heroic Achievements for his work repairing the communications wires.

Company E was also involved in one of the last major battles of the war in the German town of Heilbronn.

For nine days the Germans repeatedly attacked the town, with the 100th Infantry Division continually repelling the attacks. Nance said after many efforts, the German soldiers eventually set fire to the buildings occupied by Company E.

“The casualties were heavy on both sides,” Nance wrote, “but finally the Gl’s gained the upper hand and block by block, building by building cleared the city of Germans.”

Nance spent most of the time while in Heilbronn stationed in a power plant with company headquarters, which was not attacked by the Germans, though he was always wary of artillery fire.

The 397th Infantry had taken over two hill summits to the east of the city and as they were climbing up one of them, nicknamed “Tower Hill,” Nance said the men were first informed of the news that President Franklin Roosevelt had died.

For its heroic efforts, the soldiers involved in the battle, including those in Company E, received the Presidential Unit Citation, the highest honor an army unit can attain.

As he was moving through the woods of the Vosges Mountains in France, during his first day of combat in November 1944, he heard a mortar shell go off near him and he suddenly “felt a hot sting in the back of my hamstring muscle in my left leg.” The injury was not too bad and he kept moving. It was the only injury he sustained during this time in the war.

“I figured I was blessed to get through that war and not get any worse off than I was,” he said.

The way Nance handled fear, which he said every soldier faced, was that he recited Psalm 23 each day, especially the words: “Yea, tho I walk through the valley of the shadow of death I will fear no evil: for thou art with me.”

His father would also write him encouraging letters and would often tell Nance, “remember, this too shall pass.”

The company was moving toward the ancient French city of Bitche in December 1944 when one of Nance’s fellow infantrymen hit a trip wire and a German S-mine, also known as a “Bouncing Betty.” It bounced up about chest high around them. Luckily for Nance and the others, the mine failed to explode.

After the company crossed the Rhine River in Germany, they were advancing up a hill in the spring of 1945 when Germans started firing at them. Nance quickly jumped into a ditch. He watched as a German soldier ran down the hill and jumped in the ditch right in front of him.

“I thought to myself that this is it, one of us will die,” Nance wrote. The German soldier faced Nance and, instead of firing a weapon, held his hands up, put them behind his head and surrendered. He searched the man and found only a cleaning kit for his rifle. The kit was the only souvenir Nance brought home from his time in Europe.

Nance went back to the United States in the spring of 1946. He had spent 27 months in the army, including 18 overseas.

“I had made it! Thank God! I had gotten home at last,” he wrote when he arrived back in New York City. “I was one of the fortunate ones. It was estimated that less than 10 percent of the men who originally went over with Company E were fortunate enough to go through the war and nothing happened to them and I was one of them.”

Upon arriving home, Nance said he was “thankful to get back and start my life over again and not have to worry about getting killed.” 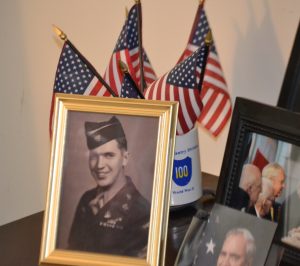 A picture of a 21-year-old James Nance.

During the six months in combat, 476 men fought in Company E of the 397th Infantry regiment. Thirty-one were killed in action, 105 were wounded in action and 39 were officially missing in action, according to “Boxcars and Burps: Easy Does It,” a book written by members of the company about their time in combat.

In November 2015 in Charlotte, Nance, along with 17 other Carolinians who served in the war, was awarded the French Legion of Honor, the country’s highest distinction, for his efforts in helping to liberate France. The award was presented to the men by Denis Barbet, the French consul general to the American southeast.

Nance spent his career working in Chevrolet dealerships in his hometown of Asheboro and later in Albemarle.

Until recently, Nance would meet with several of his fellow members of the 100th Infantry Division scattered across the country each year.

Shortly after the war, the 100th Infantry came up with an association for the soldiers who helped liberate the French town of Bitche: “The Society of the Sons of Bitche.”

Nance said he still has his original Sons of Bitche membership card, which he carries in his wallet.

Like many World War II veterans, Nance is humble and doesn’t consider himself a hero — he was simply following orders.

He said he agreed with a statement another soldier made: “I was not a hero but I had lived with heroes and a lot of them are still over there.”

A hero, in Nance’s opinion, is someone that goes above and beyond what he is expected to do.

He said Sgt. Charles Carey Jr., who was killed after he damaged several German tanks with a bazooka that had entered Rimling, was a hero. “He was one of the bravest men I’ve ever known,” Nance wrote. Carey was posthumously awarded the Medal of Honor, the highest honor a solider can receive.

When asked if repairing the phone wire, where he was potentially exposed to German attack, constituted going above and beyond, he said he was simply following orders.

Nance’s son Jim, however, does consider his father to be a hero.

“I can’t imagine doing what he did,” his son said.