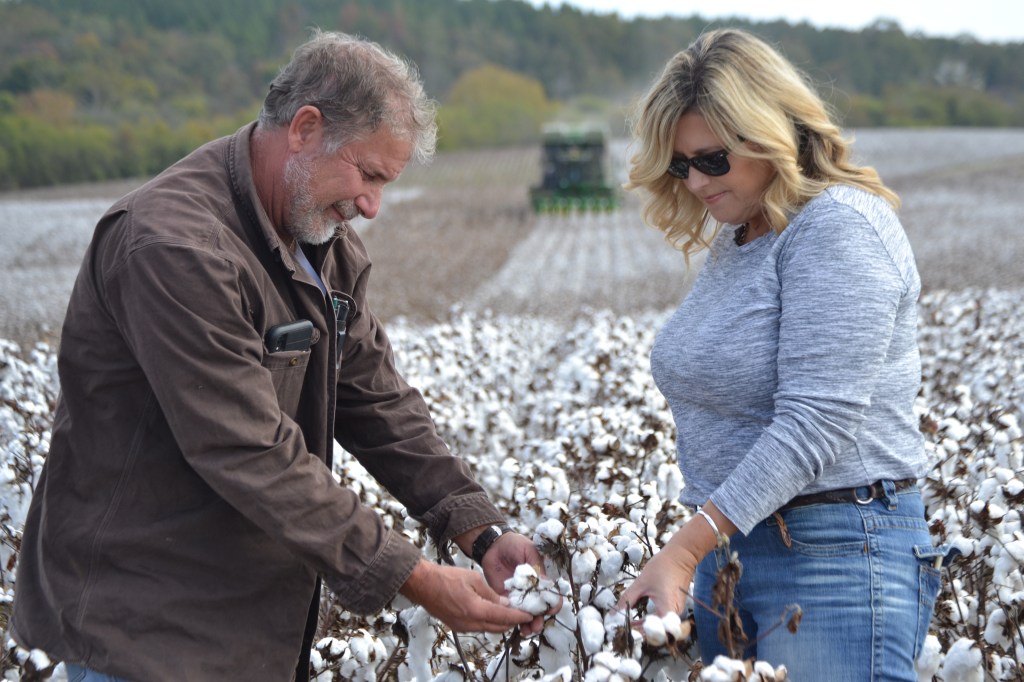 Barry McSwain and his wife Angie examine the cotton.

A sea of white often surrounds people driving past the many farm lands in the county during October and November.

For many cotton is still king.

It is especially true for Barry Evans McSwain and his 1,150-acre family farm. He grows cotton and fall is cotton-picking season.  The farm also has 14 chicken houses and about 275,000 broilers.

McSwain’s Norwood farm was selected by the Stanly Soil and Water Conservation District as the 2019 Farm Family of the Year.

“It was kind of neat to get it,” McSwain said about receiving the award. The family was honored at a Stanly SWCD board meeting and treated to breakfast.

The family, which includes McSwain’s wife Angie and sons Evans and Parker, was notified they would receive the award in early spring.

Per the Stanly SWCS, the annual award “recognizes farmers and farm families who are actively taking the initiative to implement sound, innovative and cost-effective conservation techniques.”

McSwain grew up on the farm. His father, Charles Evans McSwain, purchased the land in the 1970s.

The farm begins harvesting its cotton during early October and runs through mid-November. The John Deere cotton picker removes lint and seed from the cotton plant at up to six rows at a time and about 40 acres a day, McSwain said. As it is picking the cotton, the machine stores the cotton and compresses it into large, compact yellow round modules. The modules are then taken to the cotton gin in Red Springs, which separates the cotton fibers from their seeds. 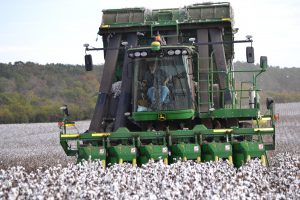 The John Deere cotton picker, operated by Rick Mabry, picks the ripe lint and seed of cotton from the plants.

Each round module contains 2,000 pounds of cotton. To put it into perspective, a single module of cotton can produce roughly 860 pairs of jeans, 1,000 bed sheets, 1,600 men’s sports shirts, 2,760 Terry bath towels, 5,024 pillowcases, 12,340 diapers and more than 1 million one hundred dollar bills, according to the website cotton.org.

Immediately after the cotton is picked and the plant stalks are cut down, McSwain drills a cover crop into the ground  — a combination of rye, radish, crimson clover and vetch — a conservation effort that helps improve the soil structure for the eventual cotton plant, suppresses weeds and protects the soil from erosion. McSwain puts about 40 pounds per acre of the cover crop mix into the soil.

Then in March, the cover crops are killed with a herbicide and rolled down with a 30-foot crop roller. Poultry litter is then applied to the land to fertilize the upcoming cotton crop. Finally, the no-till cotton is planted and the whole process repeats itself.

The McSwain farm is involved in the oldest and one of the largest cotton marketing cooperatives in the country, called Staplcotn. The cooperative handles nearly 14,000 farms across 11 states, according to its website. The farm passes the cotton it produces directly to Staplcotn, which then markets and distributes it. McSwain said the farm receives five checks a year from Staplcotn.

Aside from planting cover crops, another conversation effort at the farm has been planting trees around the edge of the property to keep the land from eroding.

McSwain enjoys the “satisfaction of seeing a good harvest crop,” while Angie appreciates that her family is “helping to feed and clothe the world.”