Gray Stone soccer falls in third round to Villains, 1-0 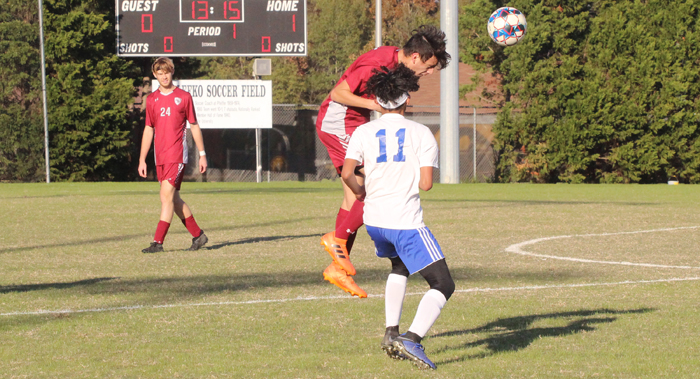 Story by Toby Thorpe, for the SNAP

All levels of sports track statistics, but the final score is what ultimately matters, including the Gray Stone men’s soccer team who lost 1-0 Wednesday night to the lower-seeded Bishop McGuinness Villains in the third round of the 1A state playoffs.

“That’s a tough thing about soccer,” said a dejected Gray Stone coach Bradley Harrington following the frigid match. “We kept them on the defensive most of the night.”

By the numbers, Harrington’s assessment is a vast understatement.

Over the course of the match, Gray Stone’s constant attack pushed the ball into the Bishop McGuinness half of the field for close to 60 of the 80-minute match and produced 17 shots on goal compared to four for the Villains. In addition, Gray Stone led in corner kicks 11-2.

The last of those four Bishop shots on goal found its mark with 3:56 remaining in the match when Ethan Conner took a pass from teammate Ethan Hodges on the right wing and fired it into the net for the only score of the night.

“We just couldn’t find an opportunity to put the ball in the goal,” Harrington said, whose team, as it has all season, carried out an attack-oriented game plan.

“We’ve had a heck of a season,” he added. “Our other losses have been to 2A and 3A teams (Watauga and Montgomery Central) who are still alive in the playoffs. I’m really proud of the progress this team has made over the course of the season.”

Gray Stone ended its campaign with a record of 18-3-1, and will graduate four seniors: Connor Morin, Luke Hill, Cameron Pierson, and Marshall Overcash.

Bishop McGuinness (13-5-1) will advance to the quarterfinals of the NCHSAA 1-A playoffs, traveling to fellow Northwest 1A conference opponent Mt. Airy on Friday at 6 pm.