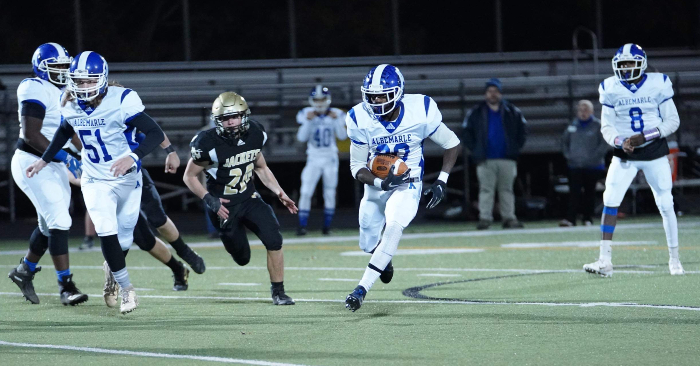 The No. 11 seeded Albemarle Bulldogs football team made the long trip Friday to No. 6 Hayesville and earned the school’s first playoff victory since 2013, 55-7.

Julius Smith had a huge night for the Bulldogs (5-7) with six rushing touchdowns to give Albemarle its first win in the postseason since the Bulldogs won Nov. 29, 2013 in the 1AA Western Regional semifinals over South Robeson, 28-20.

“It definitely feels good to get a playoff win and all the credit goes to the players and my assistant coaches,” Albemarle head coach Richard Davis said.

“This group has worked their tails off this week and they definitely deserved this win.”
Antonio Burns and Julius Smith scored two touchdowns each in the first half as the Jackets built a 28-7 halftime advantage.

Smith added two more touchdowns in the first four minutes of the third quarter and a late touchdown in the frame to put the Bulldogs up big, 48-7.

D.J. Polk added a fourth-quarter touchdown to start a running clock for the remainder of the game.

Albemarle will take on the No. 3 Thomas Jefferson Academy Gryphons (10-1) Friday in the second round of the 1A West playoffs. The Gryphons are located in Cleveland County in Mooresboro.